“Borden is not a man to be trusted. Even as a young man he was prone to dishonesty. Who knows what path he is on now.”
— Gaius on Julius Borden[src]

Julius Borden used to be a pupil of Gaius, before they parted during the Great Purge leaving Gaius in trouble. With some magical knowledge he became a thief and dedicated the next 20 years of his life towards obtaining the three parts of a Triskelion which would open the Tomb of Ashkanar.

One night Borden approached a sleeping Druid camp and stole part of a Triskelion. He woke the Druids and eventually got away. That night Julius Borden showed up in Camelot as a treasure hunter. In his possession was a part of a Triskelion, which he stole from the Druids while the other part was hidden in the vault in Camelot. That rune ornamented item was the key to the Tomb of Ashkanar, an ancient mausoleum, which held a hidden secret, the last remaining Dragon Egg, in its chambers.

He visited Gaius and asked for his help, but he refused. Yet Merlin who had watched their conversation searched him out. Borden drew Merlin in with this news and made him agree to help.

However, shortly after Merlin helped him by giving him the last part of the Triskelion, Borden betrayed him and escaped. After the theft was revealed, Merlin along with Arthur and his Knights pursued Borden to kill him and destroy the egg, however Merlin was aiming to rescue the egg. Once Borden got to know this he attacked them, wounding Percival as a result.

Borden later spiked their food with poison which rendered Arthur and the knights unconscious, forcing Merlin to heal them and pursue him alone while they were sleeping. After they both arrived at the tomb, Merlin learned that Borden only wanted the egg for power and refused give it to him. Borden then attacked him, but was knocked unconscious or killed by Merlin's magic. After getting the egg, the tomb (which was also a trap) started collapsing and while Merlin escaped with the egg, although if fate is unknown, and it is possible that he survived, Borden presumably perished along with the tomb, although it is possible that he survived, leaving his fate unknown (Aithusa). 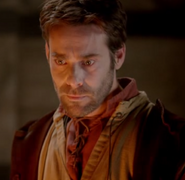 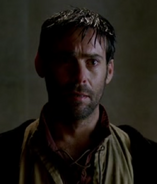 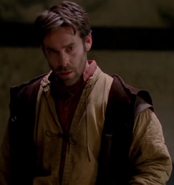 Retrieved from "https://merlin.fandom.com/wiki/Julius_Borden?oldid=128747"
Community content is available under CC-BY-SA unless otherwise noted.