Joseph Mawle portrayed the sorcerer Alvarr in the episode The Witch's Quickening of the BBC series Merlin.

Mawle was born in Oxford. He grew up in a victorian manor house in Warickshire. He is one of three children from a family with a history of nine generations of farming in Warwickshire. His mother was a teacher. His father Richard still farms the land. He attended Croft prep school where he was diagnosed as severely dyxlexic and as a result he went from the ages of 13 to 16 at a boarding school for special needs. Mawle left the school at 16 to become an actor, but contracted labyrinthitis, leaving him 70 per cent hearing-impaired in the upper register and with tinnitus. He persuaded the director of the local college at Stratford-upon-Avon to let him study for a BTEC in performing arts while doing an assortment of jobs such as fitness instructor and dish-washer. He did also do some acting for the Box Clever Theatre Company and in his own production of 'Solo Hamlet'. He won a scholarship to study at the Bristol Old Vic's theatre school.

Mawle graduated from British Old Vic theatre in 2002 in the same year he appeared in the Irish Hurling TV adverts for Guinness. He left in 2002 with no agent and worked as an assistant in a special needs school. He landed his first major role in a 2003 production of Troilus and Cressida playing Troilus in Shakespeare's play Hamlet and in 2005 the Royal exchange Manchester's production of Antony & Cleopatra followed.

It was his performance in the television film Soundproof in 2006 that made his biggest impact where a deaf actor was needed for the lead role. Mawle was nominated for the RTS breakthrough on sceen award and director Ed Coulthard won the BAFTA for best director in 2007.

Since then he has appeared in many television shows, such as Nineteen eighty, Heartless, Freefall, the street, Agatha Christie's Murder on the Orient express, Five daughter's, Dive, Made in Dagenham, Women in love and Game of Thrones.

He has several projects lined up for release in 2012 including the eagerly anticipated Working Title production of Sebastian Faulks's acclaimed novel "Birdsong", the Bruce Willis film "The Cold Light of Day", the Tim Burton produced "Abraham Lincoln Vampire Hunter" and the independent British film "Shell". 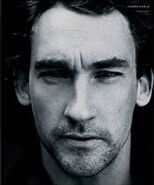 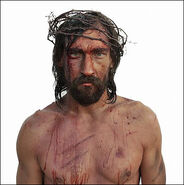 Add a photo to this gallery
Retrieved from "https://merlin.fandom.com/wiki/Joseph_Mawle?oldid=109535"
Community content is available under CC-BY-SA unless otherwise noted.