“This is gonna sound mad, but it looked like Jonas had a tail!”
— Merlin to Gaius[src]

Jonas was an unknown species with a green, reptilian tail. He was the servant and accomplice of the Troll Lady Catrina who was ultimately killed by Arthur Pendragon.

Jonas accompanied Lady Catrina when she arrived in Camelot and was in fact an accomplice in her plan of becoming Queen. Jonas provided the troll Lady Catrina with potions. It appears that he also brewed the potions, indicating his proficiency with magic. Jonas served Catrina loyally and devotedly and often prepared treats for her. Despite his otherwise human appearance, it was when Merlin noticed Jonas had a reptilian tail that he began to become suspicious of Lady Catrina's presence in Camelot. When Lady Catrina revealed her true troll form and the enchantment placed upon Uther Pendragon was broken, a fight broke out and Jonas was eventually killed by Arthur, who stabbed him (Beauty and the Beast). Jonas seemed to have also provided support and encouragement on Catrina whenever she felt down about being in her human form, scent etc.

Jonas possessed a great aptitude for Troll magic as he was able to create potions that transformed the troll version of Catrina into a normal human woman, the real Lady Catrina, thus disguising her true form and allowing her to trick the court of Camelot.

Physically, Jonas was quite strong and was easily able to lift Merlin over his head.

The morning of Catrina's wedding 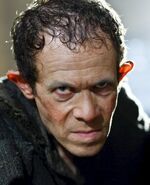 Retrieved from "https://merlin.fandom.com/wiki/Jonas?oldid=213243"
Community content is available under CC-BY-SA unless otherwise noted.