All Episodes to Date

Johnny Capps is a British producer and one of the four Co-Creators of the BBC drama series, Merlin. He has written and produced many of the episodes, as well as producing Merlin - Secrets & Magic which is the behind the-scenes for mainly Season 2 for the show. On 24 July 2011, he and fellow Co-Creator and producer Julian Murphy confirmed that Merlin would return for a Fifth Series. He has also done some of the commentaries for the DVD releases of the show. After the announcement that Merlin was finally at a close, Johnny and Julian are said to be working on a new project together and are no longer leased to Shine.

Capps has also worked on: 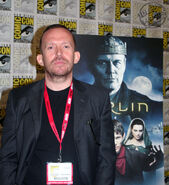