Start a Wiki
James Fox, OBE (born William Fox; 19 May 1939) is an English actor who will be portraying King Rodor in Series 5. He is related to Emilia Fox, who portrayed Morgause.

James Fox was born in London, England to theatrical agent Robin Fox and actress Angela Worthington. He is the brother of actor Edward Fox and film producer Robert Fox. The actress Emilia Fox is his niece and the actor Laurence Fox is his son. His grandfather was playwright Frederick Lonsdale. Like his brother, Fox served with the Coldstream Guards. Like several members of the Fox family, including his brothers and his son, James was educated at Harrow.

James Fox first appeared on film in The Miniver Story in 1950. His other early film appearances were made under the name William Fox.

Spiritual life and break from actingEdit

After finishing work on Performance, and following his father's death, Fox suspended his acting career. The strain of filming, his father's death and smoking the hallucinogen DMT led to a nervous breakdown.[2] On his break from acting, Fox has commented that "people think Performance blew my mind... my mind was blown long before that."[2]

He has also said that: "Performance gave me doubts about my way of life. Before that I had been completely involved in the more bawdy side of the film business. But after that everything changed.'[2]

In a 2008 interview, he said: "It was just part of my journey...I think my journey was to spend a while away from acting. And I never lost contact with it - watching movies, reading about it ... so I didn't feel I missed it."[3]

He became an evangelical Christian, working with The Navigators and devoting himself to the ministry.[4] During this time, the only film in which Fox appeared was No Longer Alone (1978), the story of a suicidal woman saved by Christianity.

After an absence of almost 10 years from mainstream cinema, Fox gradually returned to the screen, appearing in A Passage to India (1984) and playing Anthony Blunt in the acclaimed BBC play by Alan Bennett, A Question of Attribution (1992). He also portrayed the character of Colonel Ferguson in Farewell to the King.

More recently, he has appeared in the 2001 adaption of The Lost World as Prof. Leo Summerlee, Agatha Christie's Poirot - Death on the Nile (2004) as Colonel Race and Charlie and the Chocolate Factory (2005) playing Mr. Salt, Veruca Salt's father. He appeared in the Doctor Who audio drama Shada, and in 2007, he guest-starred in the British television crime series Waking the Dead. He also appeared opposite his son, Laurence Fox in "Allegory of Love," an episode in the third season of Lewis. He was part of the cast of Sherlock Holmes, as Sir Thomas, leading member of a freemason-like secret society.

In the 1960s, Fox had a relationship with actress Sarah Miles.[2] James Fox has five children with his wife Mary Elizabeth Piper, whom he married in 1973.[2] He is the father of Laurence Fox, as well as three other sons and one daughter, Lydia Fox. Both Laurence and Lydia were married to fellow actors in 2007, making James the father-in-law of both Richard Ayoade and Billie Piper. He is also grandfather to Laurence's two sons with Piper. 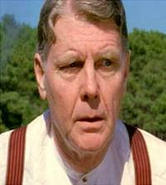 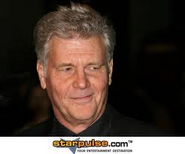 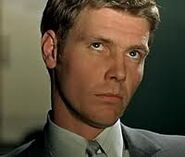 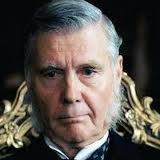 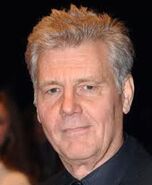 Add a photo to this gallery
Retrieved from "https://merlin.fandom.com/wiki/James_Fox?oldid=179923"
Community content is available under CC-BY-SA unless otherwise noted.