The Beginning of the End
The Coming of Arthur: Part One
Aithusa
Iseldir is a druid chieftain who dwells in his druid clan, he was once in possession of the Cup of Life and a part of the Triskelion.

As they camp during the night, Merlin hears a voice inside his head calling to him and it leads him to the Druids. Iseldir tells Merlin that Borden has stolen the keys parts from them and that the way to the tomb is at a place which appears to be a dead end. They also warn him that the key is also a trap, as is the tomb itself (Aithusa). 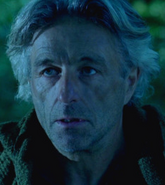