The Dragon's Call
The Moment of Truth
Le Morte d'Arthur
The Sword in the Stone: Part One

“It is every mother's fate to think her child is special, and yet I would give my life that Merlin were not so.”
— Hunith to Gaius in her letter[src]

Gaius, Hunith’s older brother[2], once hid a Dragonlord named Balinor with her because Uther Pendragon of Camelot sought to destroy all forms of magic. During this time, Hunith became close to Balinor and had unknowingly conceived Merlin, living happily in Ealdor for a time. However, when word reached Balinor that Uther had discovered he was in Ealdor and had sent knights after him, Balinor was forced to leave Hunith. Hunith, in turn, ceased talking about him, and refused to tell Merlin about Balinor out of fear for her son's safety.

When Merlin was a young man, Hunith sent him to Gaius because she hoped, as a former practitioner of magic, Gaius would be able to help Merlin with his developing powers, which had become too conspicuous for him to continue living among the people in Ealdor (The Dragon's Call).

Later, Hunith traveled to Camelot to ask Uther Pendragon to aid the village of Ealdor when it was attacked by bandits led by a man named Kanen. While Uther sympathized with her, he could not do anything to help because her village was in another kingdom, and intervention from Camelot would constitute an act of war. Merlin, therefore, returned to the village to help accompanied by Gwen, Morgana, and later Arthur. Hunith was shown to be a bold fighter when she participated in the Battle of Ealdor fighting with a broom and a cane (The Moment of Truth).

When Merlin went to the Isle of the Blessed to offer his life for Arthur’s, the sorceress Nimueh took Hunith’s life instead of Merlin’s. When Hunith came to Camelot for Gaius’ help, Merlin decided to try again at offering his life to save his mother’s. Gaius, however, left ahead of Merlin and offered his own life in Hunith's stead. As a result, both Hunith and Gaius survived as Merlin, in a rage, killed Nimueh and used her death to revive Gaius (Le Morte d'Arthur).

Hunith loves her only child and son, Merlin, very much and is always worried about him, even when she knows he is safe in Camelot. She tells him that he and Arthur are like two sides of the same coin and welcomes him warmly home when he, Arthur, as well as their new friends, Tristan and Isolde, need a place to hide during Morgana's second reign.

“My dear Gaius, I turn to you for I feel lost and alone and don't know who to trust.”
— Hunith in her letter to Gaius[src]

Hunith is good friends with Gaius, who is her brother and Camelot's Court Physician; she entrusted him with helping Merlin control his magic. Gaius had helped Hunith's lover, a Dragonlord named Balinor, escape from Uther's men during The Great Purge. Because of their shared history of hiding and caring for/loving those who had Magic, she knew that she could trust Gaius with her only son's dangerous secret. 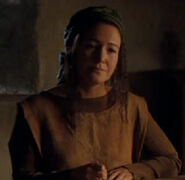 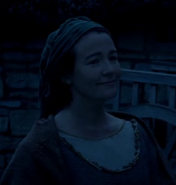 Retrieved from "https://merlin.fandom.com/wiki/Hunith?oldid=205724"
Community content is available under CC-BY-SA unless otherwise noted.