“The whole of Camelot will pay for this!”
— Queen Annis

His Father's Son is the fifth episode of the fourth series of Merlin which was first broadcast on the 29th of October 2011.

For the first time since his coronation, Arthur finds out what it means to be a King. By killing the husband of Queen Annis, he starts a war against Camelot. Horrified by his mistakes, Arthur rushes to make a deal with her: a single combat battle to the death. The agreement is if Arthur wins, Annis' armies fall back, but if he loses Annis receives half of Camelot. Determined to see Arthur dead and herself on the throne of Camelot, Morgana sides herself with Annis and assures her that she has the power to make sure Arthur dies.

An army of men are seen chasing a Knight of Camelot who is actually Merlin in disguise. Merlin is nearly killed after an axe is flung at him and then is cornered. This is revealed to be a trap set by Arthur to catch the army which has been raiding Camelot. The army is actually lead by Caerleon, king of a kingdom with the same name. Listening to Agravaine's advice, Arthur forces the king to sign a treaty to which the king refuses. Arthur kills Caerleon in cold blood. Caerleon's body is taken back to his castle. At the sight of his body, his wife, Queen Annis is furious and declares that the whole of Camelot will pay for her husband's murder.

In Camelot, Merlin tries to talk to Arthur as a friend but Arthur feels his duty towards Camelot is his to bear alone. A messenger later arrives in Camelot and informs them that Queen Annis' army is heading towards Camelot and is declaring war on Camelot. Morgana visits the Queen and allies herself with Annis, seeking to destroy Arthur for the wounds he had inflicted on her and Annis. Later, Agravaine is seen telling Arthur that he cannot be seen with Guinevere and deems their relationship inappropriate. Arthur sneaks out on the night before he is due to leave for battle to see her and tells her that their relationship must end. A heart-broken Gwen tells Arthur to listen to his heart in order to become the king he really wants to be. By morning, Camelot's army sets out for the battle. In their camp, the Knights of the Round table assure Arthur that they will stand by him and fight in his name. Arthur feels that he had made the wrong decision and has brought the war upon Camelot himself, and that he does not deserve their loyalty. He sneaks out in the night to see Queen Annis and ask her to call off the war, invoking the right of a single combat in which if he wins Queen Annis will withdraw her army, but if he loses half of Camelot will be given to Annis. Without his knowledge, Merlin had followed him to enemy camp and is discovered. Queen Annis orders him to be killed but Arthur asks for her to spare Merlin, calling Merlin a "simple-minded fool". Queen Annis spares Merlin and grants Arthur the favour, accepting Arthur's challenge of single combat, with their respective champions to be announced by noon.When Arthur names himself as the champion, Annis is worried about it and believes it must be trickery. Morgana, however, assures her that it is no trick as Arthur would always risk his own life before those of his men. Annis still acknowledges that Arthur is a great warrior and is worried they might still lose to him, but Morgana assures her that she has the power to ensure Arthur fails. With Agravaine's help, Morgana curses Arthur's sword to hold the weight of a thousand ages, making it too heavy for Arthur to wield whenever she chooses to activate the enchantment. Back in Annis's tent, Caerleon's champion is revealed to be Derian, a man of great size and strength, and a much bigger person compared to Arthur. Morgana tells Derian to have no pity on Arthur as the king must die. The two set out on their duel, witnessed by both armies. During the fight, Morgana activates the enchantment, making the sword much too heavy and Arthur loses his weapon. Seeing that Arthur was in peril due to magic, Merlin uses his magic to help Arthur turn the tables. By disarming and seizing his opponent's sword, Arthur wins the combat, but spares Derian's life. At this victory, Camelot's army chanted "Long live the king!"

Queen Annis and some of her men walk up to meet Arthur and she congratulates him on his victory. She also says that she will comply completely with their terms. When she asks for the reason that Arthur spared her champion's life, Arthur replies saying that it is not victory he seeks, but peace. To that, a pleased Annis responds that there is something in Arthur that gives her hope for all of them, indicating that it would be a new beginning for their two kingdoms.

Back in Annis' tent, a disappointed Morgana comes to see Annis. Annis taunts Morgana, stating that it seems she did not have the power after all, as Arthur was made of sterner stuff than she imagined. Morgana says that there will be other opportunities and that next time, Arthur will not be so lucky. However, Queen Annis says that there will not be a next time for her, indicating that she intends to make peace with Camelot. Morgana attempts to enrage Annis so that she would pursue revenge on Arthur, but Annis says that it is not the right thing to do. Morgana says that Annis is weak, and she will not rest until all of Camelot bows before her. In response, Annis shocks her by saying that although she came in the name of Gorlois, she resembles Uther a great deal more than she does Gorlois.Back in Camelot, their victory is celebrated. Merlin compliments Arthur, saying that he is a hero, but only to his people and not to Merlin - as Merlin knew something that others don't; namely, the fact that Arthur is a 'cabbage head'. Arthur agrees to this and states that he should have listened to Merlin, even if Merlin is the worst servant in the five kingdoms.

The next day, Arthur apologises to Gwen by giving her flowers - one of which he embarrassingly snaps in two in front of Gwen. Arthur, repeating Gwen's words to him, tells her that a good king should listen to his heart, do as he sees fit and be seen with those he cares for, even if they are "inappropriate". He pulls Gwen close and kisses her. They later share a passionate kiss as Gwen forgives Arthur for the mistake that he made.

Arthur confronts Gwen about their relationship

Morgana allies herself with Queen Annis

Morgana not happy about being compared to Uther

Derian is about to kill Arthur

Annis and Arthur come to an agreement

Morgana storms out of Annis' tent

Annis vows revenge on Arthur for killing her husband

Arthur looks up at Derian

Morgana is far from happy 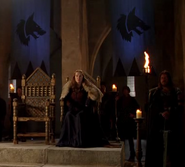 Retrieved from "https://merlin.fandom.com/wiki/His_Father%27s_Son?oldid=213321"
Community content is available under CC-BY-SA unless otherwise noted.