“Take care not to get too distracted, Helios. There's still much to do. Once I'm crowned queen of Camelot, you may indulge yourself all you wish.”
— Morgana to Helios[src]

Helios was a warlord and a powerful ally to Morgana Pendragon. He was notable for being one of the extreme few to defeat Arthur Pendragon in a swordfight but was later slain by Isolde, though he managed to take her down with him.

At some point, Helios makes an alliance with Morgana to help conquer Camelot and install her as its queen. While he awaits the fulfillment of her end of the bargain - that she will bring the plans of Camelot's siege tunnels - he and his men raid the village that Gwen is staying in during her exile. One of Helios's men is about to kill her, but at the last moment Helios intervenes and spares her, claiming there is "fun to be had". Helios takes a liking to Gwen, bringing her back to his cavernous hideout, unaware of her affiliation with Arthur and Camelot. The two dine, but are interrupted by Morgana's arrival, at which point Gwen retires to avoid Morgana seeing her. Helios speaks briefly with Morgana, lured by her promise of indulgence when she becomes Queen of Camelot, but they are disturbed by Gwen, who is making her escape. When Morgana realises Gwen was present and heard their plans, she sends Helios and his men to chase her, but ultimately catches Gwen herself. Morgana then receives the tunnel plans for Camelot from Agravaine, at which point she and Helios plan their full siege of Camelot (The Hunter's Heart).

Soon after, Morgana and Helios, with Agravaine's help, commence their planned attack on Camelot. It isn't long before the kingdom falls and Morgana proclaims herself Queen once again. However, Arthur escapes capture and the citizens of Camelot refuse to swear allegiance to her, and so she sends Helios to find the King. During Arthur's campaign to retake Camelot, Helios stays by Morgana and, when it becomes apparent that her powers are failing her, he pushes her back to take on Arthur himself. Helios bests Arthur and is on the point of killing him, but at the last instant he is stabbed from behind by Isolde, though he manages to fatally wound her in return before he dies (The Sword in the Stone).

Helios was shown to be a brash, brutish and warlike man. When a village's youngsters refused to join his army, he and his men razed the town to its knees with Helios justifying this by claiming he needed more recruits. He was also a sadistic person as he took pleasure in Morgana torturing Elyan and threatening Agravaine. He was also shown to have a weakness for women and an eye for female beauty, preventing Gwen's death because he took a liking to her. His more civilised and charming character surfaced in the company of women, producing an elegant meal for Gwen and commenting to her that he considered a person's origins unimportant compared to what they could become.

According to Morgana, Helios was often lured in by women. He was attracted to Morgana, who, knowing his lustful nature, kept his interest with implications and innuendo relating to his reward when she'd been crowned Queen of Camelot. Helios seemed something of a womaniser, picking Gwen up to dine with her, only to flirt with Morgana immediately afterwards. Helios also appeared to be sexist, and although he liked women, he did not respect them, dismissing Gwen as "just a serving wench I picked up". Possibly the only woman he actually had any respect for was Morgana.

Although Agravaine thought that Helios could not be trusted, he was shown to be loyal to Morgana, sacrificing himself to give her time to escape from Camelot. He also tried to comfort Morgana about Emrys' appearance in Camelot showing that he did care about her. He also protected her when Morgana lost her powers against Arthur. However his reasons for being so loyal to Morgana were probably because he was sexually attracted to her and because Morgana had promised that he could indulge himself after she became queen.

Helios was an incredibly skilled warrior, even managing to defeat Arthur Pendragon in a duel and was capable of easily defeating several opponents at once. Arthur only survived their duel because of Isolde's intervention and even as he was dying Helios still managed to fatally injure Isolde. Helios was extremely aggressive in combat and had exceptional physical strength being able to easily toss a fully grown man over his shoulder.

Helios was also an adept leader, in command of number of men who followed his every command and responded to his summons. 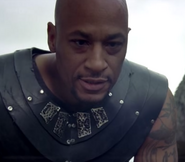 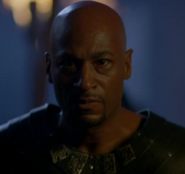 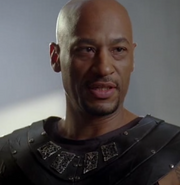 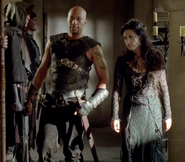 Retrieved from "https://merlin.fandom.com/wiki/Helios?oldid=128548"
Community content is available under CC-BY-SA unless otherwise noted.