Harry Melling played the character Gilli in the Series 3 episode The Sorcerer's Shadow of the BBC drama series Merlin.

He is best known for playing Dudley Dursley in the Harry Potter film series.

Harry Melling has been in the following movies:

He has apeared in several other TV shows besides Merlin, including:

He has also made several appearances on stage.

Melling alongside Daniel Radcliffe in the fifth Harry Potter movie. 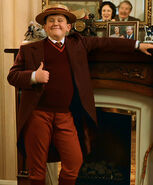 Add a photo to this gallery
Retrieved from "https://merlin.fandom.com/wiki/Harry_Melling?oldid=198233"
Community content is available under CC-BY-SA unless otherwise noted.