“If there's one thing I've learnt from my father's life it's that titles don't mean anything, it's what's inside that counts.”
— Gwaine to Merlin

Gwaine is the fourth episode of the third series of Merlin which was first broadcast on the 2nd of October 2010. It also marks the first appearance of Gwaine.

When Merlin and Arthur are vastly outnumbered in a tavern brawl, a man named Gwaine helps them win, and becomes seriously wounded after saving Arthur's life. He is taken back to Camelot, where he is treated by Gaius and makes a quick recovery. He instantly causes trouble by drinking and trying to get the ladies, but that's not the real problem, because two unscrupulous knights are sent to kill Arthur. Can Merlin and Gwaine save him from a terrible fate, or will it be too late for the future King of Camelot?

Arthur and Merlin arrive at a desolate tavern in a small village so Arthur can have a drink of mead after a long days hunting and discover 'the mood of the people'. While there Arthur witnesses a thug take the tavern owner's money and threaten her, Arthur orders him to give the money back, and a brawl ensues. A stranger intervenes to help Arthur, and fights brilliantly, introducing himself as Gwaine. Arthur has the thugs put in the stocks and reveals himself as the crown prince. Gwaine is injured in the melee and is taken to Camelot to recover. During his stay, he causes trouble, flirting with the women (including Gwen, which irritates Arthur) and raking up large bills by treating others to mead at a local tavern. Gwaine also confesses to Merlin if had known Arthur was the crown prince, he wouldn't have helped, as he has little respect for nobility.

Meanwhile, two of the thugs (Dagr and Ebor) plan to enter the melee and kill Arthur, using two magic crystals stained with the blood of two knights who had agreed to enter. The two thugs also attain swords which look blunt but are sharp. Though at first, Dagr appears inept with a sword as he is forced to fight left-handed as the knight he has slain does. They find other ways to make people suspicious of them as they appear to enjoy ordering Merlin around, but this is uncharacteristic of the knights they are impersonating.

Merlin asks Gwaine why he has such disdain for nobility, and Gwaine reveals he is of noble birth. His father was a knight and was killed in battle. When his mother went to the king to plea for help, the king laughed and turned her away. Since then, Gwaine realised nobility is only a title and thinks all knights are arrogant snobs. Merlin insists Arthur is different but Gwaine remains skeptical.  Merlin later cuts his hand on one of the swords and goes to investigate that night. After he accidentally awakens Dagr, Gwaine arrives to help. However, Dagr tells Uther that Gwaine tried to kill him, and demands his execution. Arthur protests, reminding the king that Gwaine saved his life. The king reduces Gwaine's punishment to banishment, leaving Merlin to stop the thugs on his own.

During the melee, the crowd notices two of the knights' swords seem to be doing more damage than they should. Merlin helps as much as he can without revealing his magic, by making one of the thugs fall off his horse. When only Arthur, Dagr and Ebor are left, the crowd appears to understand something is deeply wrong. A new knight who had been wounded earlier in the tournament suddenly arrives and helps Arthur. As they fight, Merlin and Arthur realise who has joined the fight, and once the thugs are dead, the mystery knight reveals himself as Gwaine. The king is furious and demands his execution for killing two knights. However, Gaius reveals the crystals, demonstrates the two knights were not really knights and convinces the king to reconsider. Arthur later talks to Gwaine, and apologises, as the king refuses to lift the previous sentence of banishment. However, Gwaine knows Arthur tried to convince the king to change his mind and tells Merlin while he would not reveal himself as a nobleman and work for Uther; he hints he might return one day when Arthur is king. 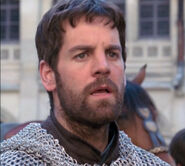 Rate this episode!
Retrieved from "https://merlin.fandom.com/wiki/Gwaine_(episode)?oldid=212918"
Community content is available under CC-BY-SA unless otherwise noted.