“The best seamstress in Camelot.”
— Merlin on Gwen

The Wardrobe of Guinevere Pendragon is full of handmade gowns and corsets sewn by Gwen herself as she is a skilled seamstress. Her wardrobe extends with different styled outfits as her relationship with her husband Arthur grows from not understanding each other to their eventual marriage. Her status in society is also a factor in her changing wardrobe choices. As she became the Queen, she wore more expensive and intricate gowns. Examples of her hand-made dresses can be seen in the gallery below.

Gwen's outfit in "The Hunter's Heart"

Warrior in the Skirmish in Ealdor 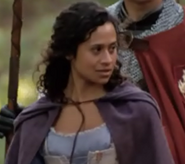 Side view of Gwen's coronation dress as she kneels before Arthur 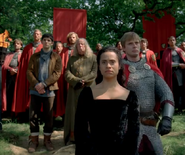 Retrieved from "https://merlin.fandom.com/wiki/Guinevere%27s_Wardrobe?oldid=205401"
Community content is available under CC-BY-SA unless otherwise noted.