“It seems you've unleashed a Goblin”
— Gaius to Merlin

Goblin's Gold was the third episode in the third series of Merlin which was first broadcast on the 25th of September 2010. It largely featured Gaius, with him having been possessed by a Goblin.

Merlin stumbles across a secret chamber and accidentally releases a Goblin. The mischievous creature then possesses Gaius, leading the once-wise physician to develop a taste for gold, ale and magical jokes.

With a suddenly-bald King Uther and a scourge of flatulence sweeping the royal household, can Merlin work out what is going on and banish the Goblin back to where he came from before any real damage is done?

Merlin enters the castle library to fetch a book for Gaius. While climbing a bookshelf to reach the book he wants, he accidentally opens a secret doorway and finds himself in a mysterious chamber. As he explores, Merlin accidentally knocks a small lead box, causing kicking and groaning to sound from within the box. Curious at to what is inside the box, Merlin uses magic to unfasten the straps tied around the box and open it, finding a small goblin inside.

The angry goblin reveals that it has been trapped in the box for over 50 years. It then starts to cause chaos around the chamber, knocking books off the shelves and even smashing a vase. As Merlin attempts to wrestle the creature back into the box before it can cause any more damage, it disappears, transforming into a small sphere of glowing golden light, and escapes from the chamber. Merlin follows the goblin back out into the library and chases after it, but loses track of the creature. Merlin follows a trail of mayhem into Arthur's chamber, which has been ransacked by the goblin. Arthur discovers him and demands an explanation for the mess, which Merlin claims is a result of his spring-cleaning. Spotting the goblin fleeing the chamber, Merlin runs after it. The creature roots through some of Morgana's jewellery, impressed at the wealth of it, but leaps from a nearby window to escape from Merlin, who tells him not to mess with Morgana's jewellery. As Merlin frantically attempts to lock the jewelries back into the box, he is spotted by Gwen and an awkward silence arises between the two.

Later, Merlin identifies the creature as a goblin in one of Gaius's books. Gaius warns Merlin that the creature is mischievous and dangerous and will stop at nothing to get its hands on the one thing it desires above all else, gold. Then, Arthur enters and summons Gaius and Merlin to the king's chamber as a matter of extreme urgency and delicacy. The prince warns the pair not to laugh at Uther's condition. Entering Uther's chamber, the trio find him hiding behind a screen – completely bald. Gaius tells Merlin in secret that the king's hair-loss was likely caused by an enchantment cast by the goblin. Merlin begins to giggle about the sight of Uther being bald and looking so annoyed about it, but Gaius warns him to what Uther would do if he found out who was responsible for releasing the goblin in the first place. Merlin decides that they need to stop the Goblin from doing any further harm. Gaius then devises a plan to trap the goblin, using gold to lure it in.

That night, Merlin removes a chest of gold coins from Arthur's chamber. While sneaking out, he knocks some crockery to the floor, waking the prince. Merlin uses magic to wrap the prince in the curtains surrounding his bed and exits the room, unnoticed while Arthur is struggling with the bed curtains and calling for the guards. Merlin and Gaius then use a trail of gold coins to lure the goblin into a trap and attempt to capture the goblin. However, the creature again transforms into golden light and enters Gaius's body through his ear and possesses Gaius. Gaius then sends an oblivious Merlin away to find the goblin.

The goblin, as Gaius, ransacks his chamber in search of gold. When Merlin returns, Gaius blames the goblin for the mess and instructs Merlin to clean up. He decides to head to the local tavern, much to Merlin's confusion. At the tavern, Gaius the Goblin spots two large men arm-wrestling for gold coins, persuading him to compete. He challenges the winner to a bout, which the old man wins with his goblin strength. He claims a bag of gold coins and licks his lips.

The next morning, a hungover Gaius orders a bemused Merlin to go to the market to fetch his breakfast. While he is gone, Morgana enters to request a draught from Gaius as she has been having trouble sleeping. "Gaius" mocks her, then tells her that he can see into her cold heart and that he knows her true feelings toward Uther. He casts a spell on the sleeping draught, then hands it over to a flustered Morgana, who walks out seeming disturbed by Gaius's sudden changes in behavior.

Later, Gaius tricks Camelot's peasants, including Gwen, into handing over their gold coins by lying about a deadly plague sweeping through Camelot and prescribing fake remedies to help protect them from the disease. He also fools Uther with a useless concoction and slaps the king around the head, claiming that it will stimulate hair growth (when he's really just doing it for amusement). In Gaius's chamber, Merlin discovers his enchanted friend licking gold coins and finally realises that he is the goblin. Merlin attempts to reason with the goblin, and threatens to kill him if he hurts Gaius. The goblin retorts that Merlin cannot hurt him without hurting the body of Gaius.

In the king's chamber, Arthur warns Uther of acts of vandalism around the castle. Suddenly the king, Morgana and Gwen all begin to break wind uncontrollably with the goblin stood to one side, smiling as his magic is working. Merlin later confronts Gaius and traps him in his chamber with magic. The goblin realises that Merlin is gifted with magic and magically thrusts a dagger at him, which the wizard deflects. Unable to bring himself to hurt his mentor, Merlin releases his control over the dagger, causing it to drop on the floor. Merlin vows to free Gaius from the goblin's control, and leaves to find Arthur.

Merlin searches for Arthur, but when he finds the prince, he is promptly arrested. Brought to the king's council chamber Merlin learns the goblin has blamed him for all of the problems affecting the court and presents the king with a book of spells he claims he found in Merlin's chamber. Merlin protests his innocence saying Gaius has been possessed by a goblin, but is unable to prove his claims. The king orders Merlin be killed. But Arthur notices Gaius's unusual behavior at the court. Later at the tavern, Gaius insults Sir Leon and spits beer in his face. He quickly apologises when the enraged knight challenges him to a battle for his rudeness towards a knight, and offers to buy him a drink. However, Gaius secretly spikes the drink with a magical potion, which causes warts to grow on the faces of all of Camelot's knights who drink the brew.

Locked in a cell, Merlin uses magic to retrieve the keys from a sleeping guard. As an alarm sounds, Merlin flees the pursuing knights and takes refuge in Gwen's home. The next morning, he asks her to convince

Arthur of Gaius's possession. Arthur invites Gaius to his chamber and confirms his suspicions when the old man is cheered by news of Merlin's death sentence, as he knows that Gaius would never wish Merlin to die. He draws his sword, claiming that Merlin was right about Gaius being possessed, and threatens the goblin but it uses magic to break a vase over Arthur's head, knocking the prince unconscious. When Gwen enters Arthur's chamber, she finds that Gaius has transformed the prince into a half-man, half-donkey creature. Taken aback she informs Merlin of it and he begins to giggle at this unfortunate-for-Arthur event.

Merlin discovers and explains to Gwen that if the host's body is dying then the goblin will be forced out. He exits in search of the lead-lined box, which formerly contained the goblin and so will trap the goblin's spirit. Merlin sneaks back into the secret library chamber and retrieves the lead box.

Later, Merlin concocts a poison, pouring it over a chest of gold coins. Merlin tells Gwen she must administer the antidote to Gaius once the goblin has left him, or he will die of the poison. The pair hide as Gaius enters his chamber and licks one of the gold coins. As Merlin and Gwen come out of their hiding place, the goblin realizes that Gaius has been poisoned, and so he leaves a dying Gaius, but flies near Gwen who is trying to administer the antidote to Gaius before he dies. The goblin knocks her, and she drops the antidote and it falls to the floor, becoming jumbled with a number of other potion bottles which all look similar. The creature attempts to possess Merlin by flying into his mouth, but he prevents it from doing so by spitting it back into the lead box and sealing the lid closed, trapping the goblin. Merlin and Gwen frantically search for the antidote to save Gaius before it is too late, eventually administering what they believe is the right potion to Gaius. After a depressing moment of nothing happening to Gaius, the old man awakens and is restored to full health.

Gaius informs Uther that Merlin is innocent and he committed the recent crimes which he caused whilst he was possessed by the goblin. The king pardons Merlin and orders the goblin's lead box be sealed in the vaults where no one can find it. When Uther questions who could have released the goblin in the first place, Gaius tells him he has no idea in order to protect Merlin. Later, Gwen encounters Arthur and the pair agree never to speak of the embarrassing events of the last few days, when Arthur turned into a half-donkey creature and Gwen caused gassy noises. As Merlin and Gaius watch Arthur training for battle, he starts to laugh to his knights but then begins to bray like a donkey. Merlin reveals to a shocked Gaius that he has decided to leave the prince slightly under the goblin's spell, just for one more day. [1]

merlin arthur as a donkey 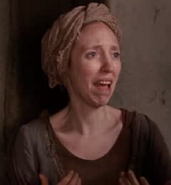 Rate this episode!
Retrieved from "https://merlin.fandom.com/wiki/Goblin%27s_Gold?oldid=212900"
Community content is available under CC-BY-SA unless otherwise noted.