Georgia Elizabeth Moffett (b. 25 December 1984) is a British actress who played Lady Vivian in Sweet Dreams in the BBC television series Merlin. Moffett was born in West London, the daughter of actors Peter Davison (born Peter Moffett) and Sandra Dickinson. She is best known for her role as DI Samantha Nixon's daughter Abigail in The Bill.

Moffett attended St Edward's School in Oxford and made her debut on television at the age of 15 in 1999 in Peak Practice, playing Nicki Davey. Moffett has also appeared in television dramas such as The Second Quest and Like Father Like Son. She played downtrodden Alice Harding in the ITV1 drama Where the Heart Is in 2004 and 2005 and has performed alongside her father, Peter Davison, in Fear, Stress & Anger and The Last Detective.

In 2007 she made her theatrical debut as Mathilde Verlaine in Total Eclipse at London's Menier Chocolate Factory.

In 2009 she voiced the role of Cassie Rice in the BBC's Animated Adventure Doctor Who: Dreamland starring David Tennant.

In June 2010 she performed in the short play Hens, which ran for four performances at the Riverside Studios and was later broadcast on Sky Arts 2, and also played a cameo role in the TV drama Thorne: Sleepyhead as the wife of one of the junior detectives (appearing in one scene in episode two, and one non-speaking scene in episode three).

Moffett became pregnant at 16, and gave birth to a son, Tyler, on 27 March 2002. Moffett and her son have appeared together on the British reality series Four Weddings and on an episode of Doctor Who Confidential, and he also interviewed her for a video for the BBC website. Tyler Moffett attends a drama school in London owned by his grandmother, Sandra Dickinson, and made his acting debut in May 2010, in a TV commercial for The Great British Teddy Bear Company.

In January 2011, several newspapers in Britain reported that Moffett was engaged to actor David Tennant, (who had portrayed the Doctor in three seasons of Doctor Who) with a wedding planned for 2012. Moffett gave birth to the couple's daughter two months later, in March 2011. Tennant and Moffett have never spoken about their relationship publicly. 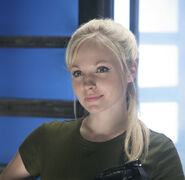 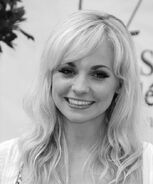 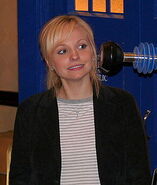 Add a photo to this gallery
Retrieved from "https://merlin.fandom.com/wiki/Georgia_Moffett?oldid=208728"
Community content is available under CC-BY-SA unless otherwise noted.