Merlin Wiki
Register
Don't have an account?
Sign In
Advertisement
in: Characters, Offenders, In The Legends,
and 9 more
English

“Take this seal to Geoffrey of Monmouth, the Court Genealogist.”
— Uther Pendragon[src]

Geoffrey of Monmouth is the court genealogist and manager of the Royal Library of Camelot. He also has the authority to perform ceremonies such as weddings and coronations.

Merlin encountered Geoffrey when he visited the library to forge a seal of nobility for Lancelot. He appeared to be somewhat suspicious of Merlin and came over to see what he was doing, but the warlock had completed his task by that time.

Later, after Lancelot became a Knight of Camelot, Uther grew suspicious of him and ordered Geoffrey to examine Lancelot's seal. He confirmed it was a forgery and Lancelot was subsequently arrested and stripped of his rank (Lancelot).

When Gaius grew suspicious of Edwin Muirden, he visited Geoffrey and asked to view the court records from the time of the Great Purge. Geoffrey initially refused because the records had been sealed, but later changed his mind and brought the records to Gaius's chambers (A Remedy to Cure All Ills).

The night before Arthur was to duel the wraith of Tristan de Bois, Geoffrey found Merlin in the library looking for a way to kill the undead. He initially scolded him for being in the library after dark, but soon decided to aid him in his mission and read him part of a fable from The Chronicles of Beltain, which inspired Merlin to ask the Great Dragon to burnish a sword for Arthur (Excalibur).

Geoffrey conducted the wedding of King Uther and Lady Catrina and Catrina's coronation, during which Catrina was named the sole heir of Camelot (Beauty and the Beast).

When Morgause challenged Arthur to a duel, Geoffrey searched the records going back 300 years and determined that there was nothing to say a woman couldn't issue a challenge (The Sins of the Father).

When Gaius sent Merlin to the library to find the The Bestiary of Phylum of Cambria, Geoffrey told him that the book was somewhere in the east wing, but he hadn't seen it in many years. Later, when Gaius came to the library to retrieve a grimoire from a hidden chamber, Geoffrey asked his advice about a pain in his leg and was shocked when the physician insulted his weight, even referring him as "Fatty". Geoffrey later forgave his old friend when it was discovered that he had been possessed by a Goblin (Goblin's Gold).

Geoffrey was to conduct the wedding of Prince Arthur and Princess Elena. However, the ceremony was canceled after the bride and groom confessed that they did not love each other and did not wish to be married (The Changeling).

When Merlin was researching the Manticore, Geoffrey offered his assistance and informed him that they were creatures of myth. Merlin returned to the library during the night to do some more research, but accidentally woke Geoffrey, who was asleep at his desk. Fortunately, Merlin was able to use his magic to convince Geoffrey he was dreaming and lull him back to sleep (Love in the Time of Dragons).

After Morgause and Morgana conquered the kingdom with their immortal army, Geoffrey was forced to crown Morgana Queen of Camelot (The Coming of Arthur).

When Agravaine - who had been left in charge of the kingdom in Arthur's absence - ordered that the city gates be shut at dusk, Gaius and Guinevere confronted him before the court of Camelot, including Geoffrey. After the librarian publicly agreed with Gwen's arguments, Agravaine reversed his order and allowed the refugees inside (The Darkest Hour).

Geoffrey was a serious and knowledgeable man entrusted with the care of Camelot's library. He was a close friend of Gaius's, an important member of Uther's court, and appeared to have a slightly strange, somewhat dry sense of humor (Lancelot).

Geoffrey was shown to be a very loyal person. Though he initially refused to let Gaius read sealed court records, he changed his mind because he trusted that Gaius would only want to see them for something important and felt it was important to repay the kindness the physician had shown him over the years (A Remedy to Cure All Ills).

Though Geoffrey displayed a suspicious and slightly grumpy nature at times, there were also many occasions where he was shown to be quite helpful. He helped Merlin research the Manticore and ways to kill the undead, and was the first member of the court to agree with Gwen's arguments for allowing refugees inside the city walls (Excalibur, Love in the Time of Dragons, The Darkest Hour).

Geoffrey of Monmouth (1095-1155) was a British writer and clergyman who composed various histories relating to Arthurian Legend. Some of his more famous works include the Historia Regum Britanniae (1136) and Vita Merlini (1150).

According to one of the directors, the Geoffrey of Monmouth portrayed in this show is meant to be the same Geoffrey that wrote the above books. It was perceived to be an "interesting" idea that Geoffrey wrote these accounts as he had lived through the events described within them. 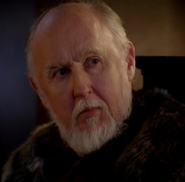