Although such magical animals were believed to have been entirely wiped out during the Great Purge, Morgana was in possession of a box, which had the sign of the Gean Canach on it, and it contained the infamous slug. She used it first to strip a sorcerer named Ari of his magic (casting this spell: "Aweax þu meteþearfende! Þicge þu þone drycræft þe þinan deorcan mode gefylþ"), to make sure she could use it on Merlin.

One of her Saxon warriors  infiltrated Camelot and put the box with the creature under Merlin's bed. When he came home from the tavern, Merlin was attacked by the slug and, before Gaius could kill it with a shovel, it consumed the young warlock's powers (The Diamond of the Day: Part 1) but, being magic itself personified, he eventually regenerated his powers (The Diamond of the Day: Part 2). 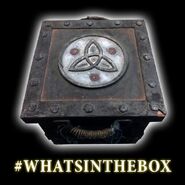 The box of the creature - prop offered as prize for a competion @ MerlinOfficial
Add a photo to this gallery
Retrieved from "https://merlin.fandom.com/wiki/Gean_Canach?oldid=211498"
Community content is available under CC-BY-SA unless otherwise noted.