The Bastet
The Lady of The Lake
The Druid Girl

“I don't think you realise how special you are.”
— Merlin to Freya[src]

Freya was a druid girl who fell in love with Merlin, who hid her from the bounty hunter, Halig, and swore to repay his kindness to him whilst on her deathbed. After her death at the Lake of Avalon, she became the Lady of the Lake.

Freya told Merlin she had lived in a beautiful place with mountains, trees, and a lake until her family died. One day, a man attacked Freya and she killed him in self defense. When the man's mother (who was a sorceress) found out, she cursed Freya to become a Bastet, a magical monster resembling a large panther with bat-like wings, on the stroke of midnight with an insatiable desire to kill she would be unable to control. This eventually led to Freya being cast out of Druid society, despite the Druid's belief to never turn away those in need.

Under unspecified circumstances, Freya was captured in a cage by the bounty hunter Halig and taken to Camelot - only to be freed from her cage by Merlin, who had ignored Gaius' warnings not to get involved. Hiding Freya in the underground catacombs, Merlin brought her food and told her about his magic. The two were drawn together due to Merlin's relief at having someone who understood him and Freya's gratitude at meeting someone who did not consider her a monster. This bond eventually blossomed into love.Unfortunately, Freya's curse resulted in the deaths of at least four people when she transformed into her Bastet form during her two nights in Camelot, prompting an increased hunt for her.

Merlin had planned to leave Camelot with Freya so that she would be safe from those hunting her; he said they would go somewhere with mountains, flowers, and a lake, a place similar to her old home. Merlin brought her one of Morgana's dresses to try and hide her identity as they left the city, lying to Gwen that he was dealing with moths in Morgana's dresses, when she caught him taking dresses out of Morgana's wardrobe (The Lady of the Lake).

Although Freya said she would go with Merlin, she attempted to escape on her own, not wanting Merlin to abandon his life for her. However, before she could leave the city, she was stopped by Halig, Arthur, and a group of knights just before her transformation. After she transformed she killed Halig, but Arthur was able to fatally wound Bastet-Freya and corner her in the courtyard.

Bastet-Freya escaped after Merlin created a distraction, retreating down to the catacombs where Merlin found her. Although Bastet-Freya appeared calmer around Merlin, not even attempting to attack him, the wound Freya had sustained proved to be fatal. Freya returned to her human form, though she survived only long enough for Merlin to dress her in Morgana's stolen gown and take her to the nearby lake.

As she died, she thanked Merlin for making her feel loved, promising to repay him one day. Merlin gave her a Viking funeral, placing her body in a little boat and pushing it out into the lake, before he set the boat aflame (The Lady of the Lake).

When Merlin met the Fisher King, the king gave him a gift, water from the Lake of Avalon, the same lake Freya was laid to rest in. The Fisher King spoke prophetically that "Albion's time of need is near and in that dark hour you must be strong for you alone can save her", but Merlin would require the help for this task. The Fisher King then handed him the bottle of water (The Eye of the Phoenix).

After Morgana and Morgause took over Camelot, Merlin attempted to use his magic on the water to no avail. Merlin fell asleep holding the bottle of water. When Gwaine got up to "answer the call of nature", Merlin accidentally dropped the bottle, breaking the glass. Merlin was horrified when the bottle broke and watched helplessly as the water spilled and flowed away thinking he had just lost Albion's last hope. He was quickly shown that smashing the glass had actually allowed him to use the water instead of wasting it. The water glowed magically and formed a puddle in a rock crevice. Freya's image materialized as the water settled, smiling at Merlin. Merlin was shocked and delighted at the sight of his beloved Freya.

Freya tenderly told him she missed him, but time was short and she could not explain how she had become the Lady of the Lake. She informed him only Excalibur could destroy Morgause's immortal army and told him she would hand him the sword to repay him for everything he had done for her.

When Merlin traveled to the Lake of Avalon, Freya gave him the sword though only her arm emerged from the lake (The Coming of Arthur).

After Arthur's death, Merlin throws Excalibur back into the Lake of Avalon and Freya's arm reaches out of the water, catching the sword and taking the sword back under the water while Merlin stands on the shore watching (The Diamond of the Day).

Before meeting Merlin, Freya was traumatized by her curse, both physically and mentally, and hated herself for being a Bastet. She even called herself a monster at one point but did not know how to tell Merlin about her curse. She desperately wanted to be an ordinary person with an ordinary life. Freya said before she met Merlin she'd always had to look over her shoulder to make sure she was not about to be ambushed. (This trait most likely originated from when she was attacked by a sorceress' son.)

Freya was a nervous and shy girl, and when she first met Merlin she was worried he was going to try and hurt her, even though he'd freed her from Halig's cage, not understanding why he would want to help her for no reason.

However, despite her fragile exterior, Freya was stronger than she appeared and was surprisingly independent as she was able to defend herself from the man who attacked her and survive on her own after her family died, though it is unknown how much time had passed since then. She quickly grew to trust Merlin greatly and fell in love with him. Merlin fell in love with her in return.

Though she hadn't been close to anyone since she was cursed, Freya was very loyal to people she cared about and even returned from the dead to fulfill a promise she made to Merlin. She was also selfless and did not want Merlin to give up his life in Camelot for her sake, believing he could have a better life in Camelot. Therefore she tried to escape on her own but was cornered by Arthur, Halig and Arthur's knights before transforming into the Bastet. Freya was grateful to Merlin for loving her and promised to repay him someday even though she was dying when she made the promise.

As the Bastet, Freya was a bloodthirsty killing machine that slaughtered at least five people during her time in Camelot including Halig. Though Freya was usually unable to stop herself from killing in her beast form, she did not attack Merlin when he stroked her, proving the strength of their bond was stronger than the strength of her curse.

Because she was a Druid, it is highly likely Freya had the ability to use magic (though she never answered Merlin when he asked if she was born a Druid, leaving it largely up for speculation as to how long she was in that lifesyle before her curse), but it is unknown how powerful she was. She possibly could have used magic to kill the man who attacked her, since she stated she didn't mean to kill him and she may have been unable to control her powers. Before her death, Freya was forced to transform into a Bastet every night because of her curse and she was only able to control herself when she was around Merlin.

It is of interest to note that she, unlike many other Druids in the series, never once speaks telepathically to Merlin. Being a Druid, however, it is likely that, though she didn't, she still had the ability to, as even seemingly unpowerful Druids (such as Kara, who is never seen using magic to defend herself, even urging Mordred to use his magic to defend them against Arthur) and magic-users who were not of Druid birth (such as Morgana and Merlin) can freely communicate in this way.

Freya also somehow returned from the dead as the Lady of the Lake, though how she managed this is never explored in the series. However, her magical abilities probably had something to do with it, along with the magical properties of the Lake of Avalon.

It is unknown if she can be considered immortal because of her ability to still exist as the Lady of the Lake.

Freya's name is never mentioned in the Merlin legend, but she is based on the Lady of the Lake.

Like Freya, the Lady of the Lake is Merlin's lover, and provided him with a sword for Arthur in his time of need. (According to most tellings this love was one sided [Merlin in love with her] in fact in more than one tale she actually falls in love with, and marries, a knight of the round table)

In some legends, the Lady of the Lake dies (as Freya does) yet seemingly comes back from the dead to help Camelot; however, the cause of her death is that a knight of the round table who got into a disagreement with her cut her head off with a sword, not because she was cursed.

In most of the legends, the Lady of the Lake is Nimueh (most often spelt Nimue or Nymue), another druid who caught Merlin's attentions in the TV Series.

Another thing the Lady of the Lake is well-known for in most of the legends is trapping Merlin in the Crystal Cave; in the series, however, it is Morgana who does this. The only connection Freya has to this scene/moment in the series is her arm being in a flashback seen within one of the crystals.

At the end of most Arthurian legends/stories, Sir Bedivere throws Arthur's sword back into the water (after betraying him three times first), where it is snatched up by the hand of the lady of the lake and brought back under the water. In the series, Merlin fills in for the role of Bedivere, with a dying Arthur in his last moments, and throws the sword in; Freya's hand is seen coming up and taking it back down into the lake.

Freya was called upon to comfort those who were dying, to ease their transition into Valhalla (the "Otherworld"), serving as a guide and companion on the journey to Valhalla for many Viking heroes who had died nobly. Freya and the Valkyries held dominion over all the dead. When Freya and the Valkyries rode forth on their missions, their armour caused the eerily beautiful flickering light that we know as the Aurora Borealis, or Northern Lights.[2]

She is perhaps most well-known for her famous necklace, the Brisingamen, and for riding about in a chariot pulled by cats.

Freya is the wife of Od, the daughter of Njord, twin sister of Freyr and mother of Hnoss and Gersemi.

Many songs today praise her. Example: [3] 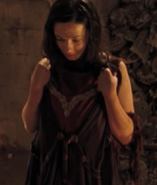