The Beginning of the End
(Merlin in Need)

“The Great Sword begotten in the dragon’s breath...”
— Geoffrey of Monmouth

Excalibur is the ninth episode in the first series, which was first broadcasted on 15 November 2008. It marks the creation of the sword Excalibur.

At Arthur’s coming of age ceremony, a mysterious black knight arrives in Camelot, to challenge the knights of Camelot to single combat to the death. As more and more of Camelot’s knights die, it becomes apparent that a secret of Uther’s past has come back to haunt him. Now Merlin must find a way to halt the revenge of a dead man before he kills Arthur and Uther.[1][2]

In a crypt below Camelot, Nimueh performs necromancy on a sealed sarcophagus, chanting several magic words ending with “Uther Pendragon”. The crypt bursts open from the inside as a gauntleted fist smashes its way out, and Nimueh smiles in delight as the sarcophagus’ occupant roars in fury.

Back at Camelot, Arthur comes of age and is crowned by his father as "Prince of Camelot", when a black clad knight on a black horse burst in to the hall through the window. The knight casts his gauntlet onto the ground as a challenge which is taken up by Sir Owain. The knight states the rules; single combat at noon to the death before galloping out. Gaius claims to Merlin he does not know the knight, but he and Geoffrey of Monmouth recognise the crest and realise that the knight is Tristan De Bois. Gaius immediately goes to tell Uther who already knows; Tristan De Bois had been killed twenty-one years previously by Uther himself, though Uther does not know how he has come back, since as he is quick to point out “Dead men do not return”.

The next day, Arthur attempts to teach Sir Owain how to fight when Guinevere comes in with a token from Morgana. Sir Owain and the Black Knight then fight; Sir Owain manages to stab the Black Knight in the belly, with no visible damage. The Black Knight then finishes off Sir Owain before issuing another challenge. Uther holds back Arthur allowing another knight, Sir Pellinore to take up the challenge. Arthur then confronts Uther about why he held him back. Uther justifies it saying that they should allow the other knights a chance to prove themselves and that Arthur is not to blame. In private, Merlin confides to Gaius that he saw Owain land a killing blow and that the Black Knight should be dead. Gaius mutters that perhaps he already is...

Merlin and Gaius go to Tristan’s crypt to discover that someone had already broken out of the crypt. Back at Gaius’ room, it is revealed that Tristan is the brother of Ygraine, Uther’s wife and Arthur’s mother. Tristan, blaming Uther for the death of his sister in childbirth, rode to Camelot and confronted Uther. Uther managed to kill Tristan in single combat, but with his last breath, Tristan swore he would return to Camelot one day and take his revenge; at the time, the threat was dismissed as a dying man’s ravings, but now Gaius fears Tristan’s threat is all too real. Gaius suspects that sorcery was involved: magic was used to harness the grief and rage of a demented soul, forming a wraith. When Merlin asks how they stop it, Gaius replies they can not; because a wraith is not alive, it cannot be killed by any mortal weapon, and it will keep on killing until it achieves its ultimate goal:revenge.

The next day’s challenge is the same as the first: Sir Pellinore fights the Knight, managing to stab the Knight (noticed by both Morgana and Guinevere). The Knight shows no sign of harm and finishes off Sir Pellinore. This time, Arthur throws down his gauntlet and issues his own challenge, to the shock of Uther. The Black Knight accepts and stalks away. Uther tells Arthur to revoke the challenge. Arthur refuses as it is against the rules, and to prove that he is worthy of the throne. Uther says that Arthur will surely die. Arthur comments that Uther has little faith in him.

Merlin suggests an idea to use magic in an attempt to destroy the Knight. Gaius goes to the King and tells him that Tristan’s tomb is empty and Tristan himself has been conjured from the dead. Gaius tells Uther not to let Arthur fight. Gaius tells Uther that no mortal weapon can kill the dead and that Arthur will die. Uther says that Arthur will not listen to him, prompting Gaius to suggest that Uther tells Arthur who the knight is. Uther reveals that Gaius has already sworn not to tell a soul and dismisses him. Meanwhile, Merlin attacks the Knight with magic, conjuring a ring of fire similar to the one Edwin conjured in episode 6. The magic has no effect, causing Merlin to confront Arthur, telling him to back out: Arthur still refuses.

In the dead of night, Uther is confronted by Nimueh in the council chambers, who states the wraith is her revenge for Uther banishing her from court and murdering so many of her fellow magic-users. Uther accuses her of killing Igraine, but she insists she had no choice: by using magic to conceive Arthur, Igraine had to die to preserve the balance of the world, and that had she known the depths of Uther’s revenge, she would never have helped him. She leaves, stating that having so many people she loved die at his hands, and now Uther will share the same misery.

Merlin, with the help of Geoffrey of Monmouth, look for information on weapons that can slay the undead. After finding a cryptic reference to weapons blessed by a dragon, Merlin gets a sword from Guinevere, who gives him the finest blade her father ever forged, then goes to the Great Dragon. The Dragon agrees to bless the sword, but insists it is only to be used by Arthur: in the wrong hands, it could be used for terrible evil.

Gaius, at Uther’s request, drugs Arthur, while Uther takes his place in the challenge. He meets Merlin in Camelot’s armoury and takes the sword for himself (remarking on its craftsmanship and excellent balance), using it to fight the wraith. He meets Tristan at the arena and tells him he can have what he came for; the father, not the son. After a long and close-fought battle, the battle reaches a turning point when Uther knocks Tristan’s helmet off, revealing the wraith - a decaying, decrepit walking corpse. Furious, Tristan attacks with renewed ferocity, knocking Uther to the floor. But Tristan’s sword becomes stuck in Uther’s shield; as the wraith works to free his weapon, Uther senses his chance and runs Tristan through; finally beaten, Tristan gives a scream of defeated rage before bursting into flames. A furious Nimueh, watching the fight in the crowd, slinks away defeated.

Arthur confronts Uther after the fight, but Uther defends himself saying he could not allow the most precious thing to him to die. Arthur is surprised by this, having believed he was a disappointment to his father.The Great Dragon, however, confronts Merlin and is furious to learn Uther wielded the sword instead of Arthur, saying that in Uther’s hands, the sword will only bring evil. As he cannot destroy the sword, the Dragon orders Merlin to hide the sword where no one can find it or uses its power. Merlin sneaks the sword out of Camelot and casts it into a lake (Avalon), where it lands on the lake floor, a shot which is shown in the opening credits. 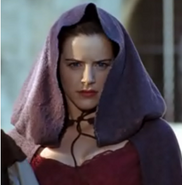 Previous story: The Beginning of the End | Following story: The Moment of Truth

Rate this episode!
Retrieved from "https://merlin.fandom.com/wiki/Excalibur_(episode)?oldid=173042"
Community content is available under CC-BY-SA unless otherwise noted.