Eve Myles portrayed the dual roles of Mary Collins and Lady Helen in the pilot episode, The Dragon's Call, of the BBC drama series, Merlin. She is best know for her role as Gwen Cooper in Torchwood.

After completing her Bachelor of Arts Degree in 2000, Eve took on the central role of Ceri Owen (Née Lewis) in the BBC Wales drama Belonging.

In 2001, Myles undertook a role in the television film Score and the TV mini-series Tales from Pleasure Beach. From 2003, Myles based herself in Stratford upon Avon. She took a supporting role in the Doctor Who episode "The Unquiet Dead" along side Christopher Eccelston as the doctor then again in 2008's" The stolen earth" and "Journeys End "as Gwen Cooper ,this time with David Tennant as the Doctor. This brought her to the attention of Lead Writer Russell T Davies, who would progress to create and produce Torchwood. Davies wrote the role of Gwen Cooper in Torchwood specifically for Myles.

She portrayed the character of Maggy Plornish in Andrew Davies' 2008 adaptation of Little Dorrit, which later went on to win seven Emmy awards. Early 2008 also saw the actress host a radio show centred around Welsh boxer Joe Calzaghe[1] and narrate a short story, Sorry for the Loss by Bridget Keehan, both airing on BBC Radio Wales. 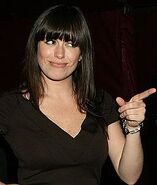 Add a photo to this gallery
Retrieved from "https://merlin.fandom.com/wiki/Eve_Myles?oldid=200811"
Community content is available under CC-BY-SA unless otherwise noted.