“Our treaty with Cenred no longer holds. We are at war. If they discovered you beyond our border, they would kill you.”
— Uther to Arthur[src]

Essetir is a kingdom in the land of Albion. It is currently ruled by King Lot, who succeeded King Cenred after he was killed by Morgause.

During Cenred's reign, Essetir was frequently at war with the neighbouring kingdom of Camelot. Hostilities eased somewhat during Lot's rule, but the two kingdoms remained enemies.

When Cenred refused to defend Ealdor from bandits, Hunith went to Camelot to ask for help. Uther sympathized with their plight, but refused to jeopardize his peace treaty with Cenred by sending an army into his lands.

Merlin, Arthur, Gwen, and Morgana later accompanied Hunith to Ealdor to help defend it from Kanen and his men (The Moment of Truth).

When Morgana's magic began to manifest itself, Merlin advised her to seek advice from the Druids in the Forest of Ascetir. He later tried to warn Morgana when Arthur and the Knights of Camelot entered the forest to rescue her, as Uther believed that the Druids had kidnapped her (The Nightmare Begins).

When Kilgharrah attacked Camelot, Arthur and Merlin embarked on a quest to find Balinor, the last Dragonlord. They started their search in the village of Engerd, and from there they traced Balinor to a cave in the Forest of Merendra. He eventually agreed to help them, but was killed by bandits before they reached Camelot.

According to Uther, Camelot's accord with Essetir had fallen through by this point and the two kingdoms were at war. If Cenred had discovered Arthur in his lands, he would have killed him instantly (The Last Dragonlord).

One year later, Morgause approached Cenred and proposed an alliance. She explained that Morgana placed an enchantment on Uther to drive him mad, leaving Camelot vulnerable to attack. Cenred was unsure of her plan, as the citadel was known to be impregnable and he didn't trust Morgana, but Morgause soon persuaded him to amass an army and march on Camelot.

By the time Cenred's army reached Camelot, Arthur had received word of his activities and prepared the citadel for a siege. Cenred surrounded the city by nightfall and, at Morgause's urging, began his attack. His men bombarded the city with debris and broke through the city gates to capture the Lower Town.

Meanwhile, Morgana snuck into the castle's burial vault and used the Rowan Staff to resurrect an army of undead skeletons. Forced to fight a battle on two fronts, the Knights of Camelot were in danger of losing the citadel, but began fighting with renewed vigour after Merlin defeated Morgana and destroyed the Rowan Staff, reducing the skeletons to dust. Certain that the battle would now turn against them, Cenred ignored Morgause's protests and ordered his army to retreat (The Tears of Uther Pendragon).

Cenred later renewed his alliance with Morgause and Morgana by kidnapping Gwen's brother Elyan. They used Elyan to force Gwen to lure Arthur into a trap at the Castle of Fyrien, but were defeated when Merlin used his magic to caused an explosion so Arthur and the others could escape (The Castle of Fyrien).

When a Camelot patrol led by Leon trespassed into Essetir, they slaughtered by Cenred's men. Leon was found and saved from the death by the Druids, who used the Cup of Life to heal him. Worried that the Cup would fall into Cenred's hands, Uther sent Arthur on a secret mission to retrieve it from the Druids.

Soon after crossing the border into Essetir, Arthur and Merlin were captured by Jarl, a slave trader who Cenred allowed to operate in his kingdom so long as he did not bother him. They discovered that Gwaine was also being held prisoner, and together the three of them escaped.

The trio successfully retrieved the Cup of Life from the Druids, but were later ambushed by Cenred, who had been informed of their movements by Jarl. Cenred seized the Cup and delivered it to Morgause, who used it to transform his men into an immortal army. Then, with no further use for Cenred, Morgause betrayed and killed him.

Morgause used the immortal army to conquer Camelot and put Morgana on the throne as Queen. Later, when Arthur and his allies retook the kingdom by destroying the army, Morgana and a badly injured Morgause fled in the aftermath (The Coming of Arthur).

After his death, Cenred was succeeded by King Lot, who was known to decorate his fortress with trespassers' heads and was not a friend of Camelot (The Sword in the Stone).

Arthur, Merlin, and the Knights of the Round Table traveled across Essetir during their quest to retrieve the last dragon egg from the Tomb of Ashkanar (Aithusa).

When Morgana and Helios conquered Camelot with their Southron army, Merlin and Arthur sought refuge in Ealdor. They were accompanied by smugglers Tristan and Isolde and were later reunited with Gwen, who had gone to live in Ealdor after Arthur exiled her from Camelot.

Unfortunately, Agravaine soon tracked them down and led an attack on the village, forcing them to flee. They escaped through some nearby tunnels and later set up camp in the Forest of Ascetir, where Merlin contacted Kilgharrah and requested his help in locating other survivors from Camelot.

The next day, Merlin gathered the remaining Knights together to witness Arthur pull the sword Excalibur from a stone. The act restored Arthur's confidence and motivated him to retake Camelot (The Sword in the Stone).

Series 1
The Moment of Truth
Series 2
The Nightmare Begins
The Last Dragonlord
Series 3
The Tears of Uther Pendragon: Part One
The Coming of Arthur
Series 4
Aithusa
Lancelot du Lac (Mentioned only)
The Sword in the Stone 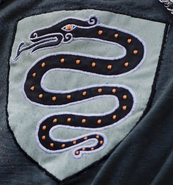