“I cannot do it. I cannot betray my master's trust.”
— Eoghan to Agravaine[src]

Eoghan was the mapmaker's apprentice. Agravaine bribed him to obtain some well secured plans for the siege tunnels in the vaults of Camelot.

Prior to failing to receive the plans for the siege tunnels, Eoghan returned to Agravaine and told him it wasn't so easy, and by stealing the plans he would be betraying his master's trust. Agravaine told him he'd rather disobey him and told him how someone of his position could so easily have him arrested. Agravaine then murdered Eoghan without warning, stabbing him in the stomach and knocking him out, before dragging him out in front of a castle wall to make it look like he'd fallen.

Leon later found the boy's body and shown it to Agravaine. Gaius was then called upon to investigate the death. It appears to be a fatal accident or suicide, but Gaius wasn't convinced when he found a letter from Odin's court. Agravaine delivered the letter to Arthur without haste, and requested access to the siege tunnels. Arthur granted this access. With access to the vaults, Agravaine was about to take the plans himself (The Hunter's Heart). 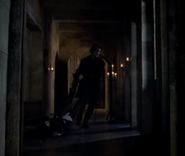 Add a photo to this gallery
Retrieved from "https://merlin.fandom.com/wiki/Eoghan?oldid=215982"
Community content is available under CC-BY-SA unless otherwise noted.