Duel between Arthur and Helios

The first and final duel between Arthur and Southron warlord Helios took place in the throne room in Camelot during Arthur's second rebellion of Camelot against Morgana's second reign. Morgana and Helios were expecting Arthur's presence in the same room, thanks to the warning bells and previous notice from Southrons as Arthur and his small army arrived. Morgana had planned on killing Arthur and those who were with him herself (Merlin, Gwen, Isolde, and Tristan) and had Helios by her side as backup. After Morgana's stunning spell ("hleap on baec") failed thanks to Merlin's poppet, Morgana left the room, but Helios remained to take on Arthur. It is unknown if Helios would have taken on Isolde and Tristan as well as Arthur, if more Southrons had not arrived. Helios may have planned for more Southrons to arrive at that time should the situation occur, hence the timing.

The duel was with a single sword for each opponent. Arthur was disadvantaged due to a rib injury, which may or may not have been the reason for Helios's short-lived triumph of Arthur, although the outcome may have been the same if the injury had not occurred, as Helios had showed remarkable strength when entering Camelot the episode before. Helios managed to disarm Arthur's sword, and took him down to the ground with a punch to the face. He immediately proceeded onto stabbing Arthur in the heart to kill him, but this attempt was thwarted, and Helios was killed instead, from a surprise attack from behind by Isolde. This, unfortunately, resulted in Isolde's death, as Helios made one last blow from behind as he fell (The Sword in the Stone). 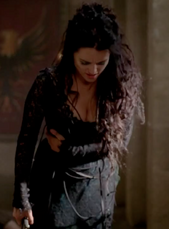 Meanwhile, Morgana flees and kills three knights, but is injured by two
Community content is available under CC-BY-SA unless otherwise noted.
Advertisement