Start a Wiki
watch 01:50
'Merlin' Profile: Dragons
Do you like this video?

“Dragons are not monsters. They are creatures of wonder and magic.”
— Gaius to Merlin[src]

Dragons were creatures of magic that lived in the land of Albion. They were noble and powerful creatures, known to be near-invincible and humbled only by the Dragonlords.

The dragons were among those targeting during the Great Purge. They were near-extinct by its end.

According to Arthur, the dragons were responsible for bringing down the kingdom of Daobeth. This occurred hundreds of years before Uther's reign (The Darkest Hour).

Dragons had a special bond with the Dragonlords, men who possessed the ability to talk to, tame, and control them. According to Balinor, Dragonlords and dragons were spiritual brothers and shared a connection of the soul (The Last Dragonlord).

According to Gaius, dragons were once close allies with Trolls (Beauty and the Beast).

The dragons were hunted nearly to extinction during the Great Purge. When only Kilgharrah remained, Uther Pendragon convinced the Dragonlord Balinor to call him to Camelot so that he could make peace with him. The King betrayed them, however, and imprisoned Kilgharrah in a cavern beneath the castle. He then proceeded to round up and slaughter the Dragonlords, as he believed their abilities to be too close to magic (The Last Dragonlord).

Kilgharrah was imprisoned for at least twenty years before Balinor's son Merlin set him free. Seeking vengeance for what was done to himself and his kind, the dragon launched an attack on Camelot that lasted several days. He was eventually stopped by Merlin, who had inherited his father's Dragonlord abilities and used them to order Kilgharrah away from Camelot (The Last Dragonlord).

Around three years later, Merlin recovered the last remaining dragon egg from the Tomb of Ashkanar, where it had been hidden for four hundred years. He used his Dragonlord abilities to summon the dragon from its egg and named the hatchling Aithusa (Aithusa).

Though Kilgharrah and Aithusa are the only remaining dragons in Albion, Wyverns (distant relatives of dragons) are still in existence. They differ from dragons in that they have red eyes and are only slightly larger than humans, and also appear to be more animalistic in nature. They are known to live in the Perilous Lands and on the Isle of the Blessed (The Eye of the Phoenix, The Darkest Hour).

The Dragons in Merlin have many similarities to dragons in western mythology. They are reptilian in appearance with scales, four legs, long tails, and large wings.

Dragons came in many different colors. Kilgharrah, for example, had golden brown scales while Aithusa had white. White dragons were considered to be especially rare (Aithusa). Their eye colors could also differ, as Kilgharrah had golden eyes while Aithusa's were blue.

Newborn dragons appear to have thin bone structures, and their wing sails are near transparent membrane (Aithusa).

“Do not imagine that your petty magic can harm me!”
— Kilgharrah to Merlin[src]

Dragons were known to possess considerable knowledge and powerful magic. They were impervious to most weapons, including enchanted ones. Merlin's enchanted spear, for example, failed to so much as wound Kilgharrah (The Last Dragonlord).

As with most dragons of myth, the dragons of Merlin had the ability to breathe fire and fly. Despite their massive size, dragons were much faster and more graceful than they appeared, and were able to avoid numerous projectiles such as arrows even when they were fired at the same time (The Last Dragonlord).

They also possessed great strength, and could easily defeat an entire group of human Knights with minimal injuries. A single dragon was capable of ravaging a city in a matter of weeks (The Last Dragonlord, The Darkest Hour).

A strike to the heart was capable of killing a dragon. However, because few people were aware that their hearts were located on the right side of their chests rather than the left, this tactic rarely proved effective. Arthur, for example, attempted to thrust a spear into Kilgahrrah's heart, but because he aimed for the left side of the dragon's chest he only succeeded in wounding him (The Last Dragonlord).

Considering how difficult it is to kill a dragon, it is unknown how Uther managed to hunt them to near-extinction during the Great Purge. It's possible that he somehow forced or convinced the Dragonlords to help him, as dragons were powerless to resist their commands (The Last Dragonlord).

Judging by how easily Kilgharrah slaughtered a contingent of Knights and an entire party of armed mercenaries, it seems very unlikely that Uther could have managed to kill even a single dragon without the help of powerful magic (The Last Dragonlord, The Sword in the Stone).

In addition to being near-invincible, dragons also had the ability to perform magic. Kilgharrah, for example, was able to use enchantments to heal Merlin of a Serket sting and release him from Morgause's magical chains (The Tears of Uther Pendragon). They also had the ability to telepathically transmit spells into another person's mind (The Curse of Cornelius Sigan, The Crystal Cave).

Their fiery breath had the power to infuse weapons with magic and give them great power (Excalibur, The Diamond of the Day).

A dragon's breath also had the power to heal someone from injury, including fatal ones. Aithusa, for example, was able to heal a dying Morgana in The Sword in the Stone. Kilgharrah also helped Merlin to heal Morgana of her fatal skull fracture in The Crystal Cave, though whether he used this ability to do so or merely transmitted a healing spell to Merlin is unknown.

Dragons are able to procreate by laying eggs that can remain viable for more than a thousand years. However, it is impossible for an egg to hatch unless a Dragonlord calls the unborn dragon into existence by going it a name. As such, even if there were thousands of dragon eggs in existence, without a Dragonlord none of them would ever hatch, and the species would likely die out (Aithusa).

Series 1
The Dragon's Call
Valiant
The Mark of Nimueh
A Remedy to Cure All Ills
The Beginning of the End
Excalibur
To Kill the King
Le Morte d'Arthur
Series 2
The Curse of Cornelius Sigan
The Nightmare Begins
Beauty and the Beast: Part Two
Sweet Dreams
The Witch's Quickening
The Fires of Idirsholas
The Last Dragonlord
Series 3
The Tears of Uther Pendragon: Part One
The Tears of Uther Pendragon: Part Two
The Crystal Cave
The Eye of the Phoenix (Mentioned only)
Love in the Time of Dragons (Mentioned only)
The Sorcerer's Shadow
The Coming of Arthur: Part Two
Series 4
The Darkest Hour: Part One (Mentioned only) (Deleted scene only)
The Darkest Hour: Part Two
Aithusa
The Sword in the Stone: Part Two
Series 5
Arthur's Bane part 1 and 2
The Kindness of Strangers
The Diamond of The Day

The Dragons in Merlin are very similar to those in western mythology, which are usually portrayed as massive, fire-breathing reptiles.

Much like in the series, European Dragons can live for hundreds or even thousands of years and come in a variety of different colors. They are often portrayed as monsters or villains and are usually depicted guarding castles or caverns filled with gold and other treasures.

Dragon is derived from the Greek word Drakon, which means "huge serpent".

Chinese Dragons, as opposed to western dragons, are revered as creatures of zen and goodness. 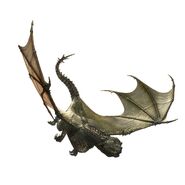 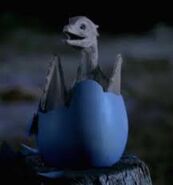 Retrieved from "https://merlin.fandom.com/wiki/Dragon?oldid=210410"
Community content is available under CC-BY-SA unless otherwise noted.