Merlin Wiki
Register
Don't have an account?
Sign In
Advertisement
in: Characters, Male Characters, One episode appearance,
and 7 more

“You have served my husband well, Derian. I know you'll do the same for me.”
— Queen Annis to Derian[src]

Derian is a soldier of Caerleon who was selected to fight King Arthur Pendragon in single combat.

When King Arthur Pendragon of Camelot invoked the right of single combat in order to prevent full-blown war with Queen Annis after the death of her husband at his hands, Derian was selected by Annis as her kingdom's champion to fight Camelot's, as he served King Caerleon well. Another reason for him being Queen Annis' choice could be that she felt his size would make him a worthy match against Arthur's sword abilities. Derian therefore went out to fight Arthurone-on-one, though Morgana had Arthur's sword enchanted so that it would become too heavy for him to hold it during the fight. Arthur and Derian's fight was witnessed by the armies of both sides. Despite Morgana's meddling, Arthur was able to defeat Derian with the help of magic from Merlin. Arthur, having defeated his opponent, spared Derian's life, throwing the sword into the ground next to Derian's head. Shortly after this, Arthur made a truce with Queen Annis (His Father's Son). 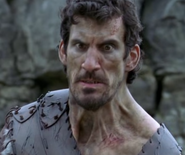