Dale McCready is a New Zealand-born cinematographer working internationally but is based in the UK. Additionally, he specialises in drama and visual effects photography. Furthermore, he has worked on 42 episodes on Merlin, from Series 1 to Series 5.

McCready has worked on the following episodes: 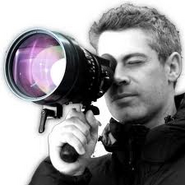 Add a photo to this gallery
Retrieved from "https://merlin.fandom.com/wiki/Dale_Elena_McCready?oldid=176053"
Community content is available under CC-BY-SA unless otherwise noted.