Merlin Wiki
Register
Don't have an account?
Sign In
Advertisement
in: Sorcerers, Enemies and Villains, Characters,
and 21 more

After witnessing Merlin's magic, Sigan suggests that he and Merlin form an alliance. However, when Merlin rejects the offer, Sigan leaves Cedric's body and attempts to possess him in order to bind their powers. Using a spell that Kilgharrah recently taught him, Merlin is able to trap Sigan's soul back inside the jewel. Uther has the vault where the tomb and soul of Cornelius Sigan lay resealed (The Curse of Cornelius Sigan). 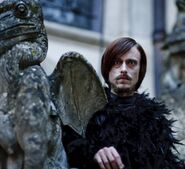