4
Charlene McKenna is an award-winning Irish actress who played the creature, Lamia in the Series 4 episode Lamia of the BBC series Merlin.

McKenna first appeared on stage at the age of eleven, playing a small role in Oklahoma! with the Monaghan Youth Theatre.[1] She studied Religious Education and Music at Mater Dei Institute of Education.[1] Her first large-scale production was Pure Mule which launched her career.[1] She played Jennifer, a racy character, in the series.[2]

McKenna has had roles in several other Irish television shows as well, including Raw, Single Handed and Whistleblower.[3] She had a role in a two-hour Dickensian period drama filmed in Dublin and broadcast on ITV in late 2007.[4] The drama also featured Derek Jacobi, Toby Jones, Bradley Walsh, Zoë Wanamaker, Martin Freeman, Steve Pemberton, Anna Madeley and Gina McKee.[4]

In 2007, she filmed the short film Danger High Voltage at the Electric Picnic music festival in Stradbally, County Laois. The film, which also starred Barry Ward and was directed by Luke McManus, went on to win awards at both the Galway Film Fleadh and the Cork Film Festival in 2008.

She appeared in the second episode of Single Handed 2, broadcast on 1 January 2008, in which Garda Sergeant Jack Driscoll investigated the case of the missing two-year-old son of her character, Eilish.[2][5] Eilish also had to endure several resentful in-laws.[6] This performance was described as "outstanding".[7]

Whistleblower, a two-part fact-based drama broadcast in August 2008, was based on the late 1970s scandal at Our Lady of Lourdes Hospital in Drogheda, County Louth, involving gynaecologist Michael Neary.[8] McKenna played Karen, a young mother who has an unnecessary hysterectomy performed on her after giving birth.[8] Emma Stansfield played the nurse who blew the whistle.[8]

For her role in Raw, McKenna stripped naked for a full frontal scene in the fourth episode.[3] The actress was pleased with the lack of complaints about the scene, apparently considering it an indication of the growing tolerance of Irish audiences. Scenes involving restaurant staff tampering with their guests' food similarly failed to attract much complaint.[3] McKenna's character in the series is Jojo, a young chef, working under Tanya, a stressed manager, and a head chef. In the second episode, Jojo organises a party but the alcohol runs out and tensions rise.[9][10] Raw, a six-part series set in a fictitious restaurant in Dublin, saw McKenna interact with Bachelors Walk actor Keith McErlean and Mistresses actress Shelley Conn.[11]

McKenna also appeared in the film Dorothy Mills, which was released in 2008, as the role of Mary McMahon.

She narrowly lost out on a role in the film Land of the Lost opposite Will Ferrell.[3] Despite meeting the director, the part was given to Anna Friel instead.[3]

McKenna returned to Irish screens later in 2009 as the character Jojo in the second series of Raw on RTÉ Two.[12] The show returned for a third series, which first aired on the 9th of January, 2011.

In 2011, McKenna appeared in an episode of Channel 4 comedy-drama Sirens. She played the eponymous antagonist Lamia in that episode (the eighth) of the fourth season of the BBC TV series Merlin.[13] She starred in Misfits as Seth's dead girlfriend, Shannon. 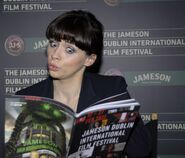 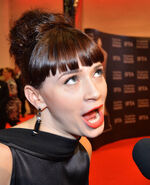 Add a photo to this gallery
Retrieved from "https://merlin.fandom.com/wiki/Charlene_McKenna?oldid=213579"
Community content is available under CC-BY-SA unless otherwise noted.