Merlin Wiki
Register
Don't have an account?
Sign In
Advertisement
in: Kings, Enemies and Villains, Deceased,
and 14 more
English

“For such a great king, you have very little patience!”
— Morgause to Cenred[src]

King Cenred was the ruler of a rival kingdom bordering Camelot. While the kingdom is never named, it is often named "Essetir" in fanlore. He was also an associate of Morgause, who was a High Priestess of the Old Religion.

Cenred struck an accord of peace with Camelot, which took many years to make. Cenred thought little of towns in the outlying regions of his kingdom, so when Ealdor pleaded with him to help them fight Kanen's brigands he refused to send any troops despite his vast military force (The Moment of Truth).

Later, Cenred broke the peace agreement with Camelot and his men attacked Merlin, Arthur, and Balinor from their return journey to Camelot to defeat the Great Dragon (The Last Dragonlord).

After Morgause and Morgana caused Uther Pendragon to go mad, she told Cenred that without a leader, Camelot was vulnerable. But Cenred was unsure, stating that even with Uther incapacitated, an assault on Camelot could not be taken lightly. Morgause informed him that she had an ally in the court; Cenred doubted that the ally was reliable and feared they might be a traitor. Morgause assured him that Morgana could be counted on until the end, convincing Cenred to take the fight to Camelot. He then gathered his forces, with mercenaries flooding into his kingdom. The invasion force was soon complete and he led his soldiers marching to the weakened kingdom of Camelot in their thousands. Cenred watched the battle but his army was defeated when Merlin thwarted the plans of Morgause and Morgana forcing Cenred to retreat (The Tears of Uther Pendragon).

Cenred later sent men to capture Guinevere and her brother Elyan in an attempt to lure Arthur into a trap. Once again he was attempting to please Morgause, which provides further evidence that he was attracted to her. Arthur arrives in Cenred’s kingdom along with Morgana, Merlin, and Gwen (whom Cenred released so that she could tell Arthur about her imprisoned brother). Cenred captured all of them and intended to torture Arthur for information about Camelot but Arthur and Merlin escaped before freeing Gwen and Elyan and going to search for Morgana.

Morgana acted as a hostage and when Arthur attempted to rescue her, Cenred held a sword to her throat while Morgause attempted to kill Arthur with magic. Their plan was thwarted once more by Merlin, who sabotaged Morgause' spell causing an explosion which knocked out her and Cenred (The Castle of Fyrien).

Cenred was involved in getting the Cup of Life for Morgause. He was betrayed by the sorceress who got one of his own men to turn against him. Cenred stabbed the warrior but because he was immortal, the man overpowered and killed him. Morgause then used his army to conquer Camelot and make Morgana queen. His army was eventually destroyed by Merlin after Morgana's brief rule of Camelot (The Coming of Arthur). After his death, his kingdom was taken over by King Lot.

King Cenred was a sadistic, ruthless and cunning yet cautious man and even after Uther Pendragon was driven mad by Morgana, he was still hesitant to attack Camelot. Arthur claimed that he was a coward and always had been, though Cenred retorted by saying that a coward was a survivor, indicating that he was not ashamed to be branded a coward, caring more about his life than about his pride. Cenred preferred to allow others to do the fighting for him watching the siege of Camelot rather than participating in it. He had a deep hatred for Camelot, stating "no friend of Camelot is innocent".

However, despite his cautious and shrewd nature, Cenred also lacked patience, a flaw that was pointed out by Morgause. Cenred appeared to have a fairly good relationship with Morgause right up until she betrayed him, regularly complimenting and flirting with her, though she appeared to have little sentiment for him in return since she killed him ruthlessly. Despite his attraction to her, however, Cenred also claimed he would rather fail Morgause than allow countless men to die needlessly, proving a distinctly honorable and valiant side to his personality, and proving that he did care for his men, (but very little for his outlying regions such as Ealdor, by refusing them help when attacked by bandits), in contrast to his power-hungry and bloodthirsty streak.

King Cenred was trained in swordplay but due to his preference to stay out of combat, the extent of his sword skills are unknown. However, he was skilled enough to hold his own against one of his men when Morgause turned the man against him, and would have killed him if the man hadn't been immortal. He owned two swords which he kept in a pair of sheaths on his back but only used one of these swords when fighting against his killer.

In a deleted scene from (The Castle of Fyrien), after Merlin sabotaged Morgause spell which causing an explosion, Cenred attacked Arthur and a while, was able to not only fight him on equal terms, fending off his punches sword-to-sword, but also maintained the rhythm of the attack, forcing Arthur to defend himself.[1]Based on this, It can be say, that his skill with a sword rivaled Arthur's, although in the original series the two never fought each other to the end.

Series 1
The Moment of Truth (Mentioned only)

Series 2
The Last Dragonlord (Mentioned only) 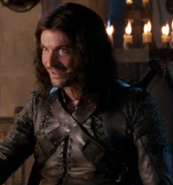 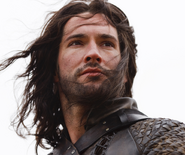