Start a Wiki
The Caves of Balor are a vast underground structure beneath the Forests of Balor. It is likely that the caves extend below a country called Balor. The caves are populated by giant spiders, and are home to the Mortaeus flowers that grow on the roots of the Mortaeus tree.

Prince Arthur Pendragon ventured into the caves in search of the Mortaeus flower's leaves when Merlin was poisoned by the sorceress Nimueh. Arthur was accompanied by Nimueh, not knowing that it had been she who poisoned Merlin, and was left for dead in the caves; he was ultimately rescued by Merlin, who in his poison-fever conjured a light to lead Arthur out of the caves (The Poisoned Chalice).

Illustration of the caves

Nimueh leads Arthur through the caves 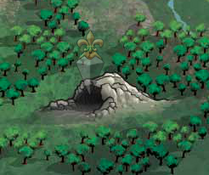 The caves as seen in Merlin Game
Add a photo to this gallery
Retrieved from "https://merlin.fandom.com/wiki/Caves_of_Balor?oldid=206128"
Community content is available under CC-BY-SA unless otherwise noted.