Camelot was a kingdom in Albion. From the time of the Great Purge, when magic was all but wiped from the land, it has been ruled by the Pendragon family. In modern times Camelot turned into myth.

A prominent feature of Camelot is the citadel. The upper quarter of the city is the portion closest to the castle where the artisans such as Guinevere and her father, Tom, used to live. A tavern called The Rising Sun is located near the citadel, and is frequented visited by the Knights of Camelot. The lower quarter is closer to the edge of the city where the lower classes live. When Nimueh poisoned the water supply with the Afanc, the lower quarter was cordoned off as this was where most of the victims were (The Mark of Nimueh).

Every year, Camelot hosts the Tournament of Camelot. Competitors from across the five kingdoms travel to the city to take part.

In the middle of the city is the castle where the royal family (Uther, Arthur and Morgana) and the nobility live, and where court is held. The castle is large and constructed of white brick. It has several tall towers and complex architecture. Within the castle grounds are the quarters of the court physician, where Gaius and Merlin live. The citadel houses a garrison of at least 12,000 men and, before Morgause's invasion, had never fallen in a siege. It is currently the home of Guinevere Pendragon, the Queen of Camelot.

Camelot is an absolute monarchy that was ruled by Uther Pendragon until he was deposed by his daughter, Morgana, and her half-sister Morgause. Morgana, however, was soon overthrown by Merlin, Arthur and his common-born knights. (The Coming of Arthur)

Arthur Pendragon took over the kingdom as the Prince Regent when it became clear that Uther's spirit was broken by Morgana's betrayal. Arthur formally succeeded his father as king when Uther eventually succumbed to wounds dealt him by an assassin. (The Wicked Day)

Camelot is widely known for its laws banning all forms of magic and enchantments on penalty of death, usually by burning or beheading. Such laws have been in place for more than twenty years, having been enacted during the Great Purge that followed the birth of Arthur and the subsequent death of Queen Ygraine. These laws make Camelot, and Arthur specifically, the target of several attacks from Rogue Warlocks and Witches, such as Nimueh, Morgause and Morgana Pendragon.

Camelot is shown to possess a powerful military led by the Knights of Camelot. Their coat of arms is a golden dragon on a red background. Knights and high ranking officers wear red cloaks over their armour and archers seemed to be armed with crossbows. As said by Cenred, "...they have a reputation as a fearsome fighting force." Morgana also states that the Knights of Camelot are "...famed as the greatest knights in five kingdoms."(The Sword in the Stone, part 1 )

Because the kingdom fell to Morgause and Morgana's army, it can be assumed that most of Camelot's army was destroyed fighting the immortal army. They were replaced with the Blood Guards and Cenred's immortal army until Arthur and the Knights of the Round Table took back the kingdom and rebuilt their forces. (The Coming of Arthur).

They also fell to Morgana and her army again, mostly because they were caught off guard. Quickly afterward though, they took back the kingdom. (The Sword in the Stone Part 2) 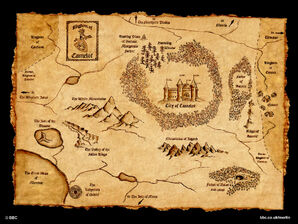 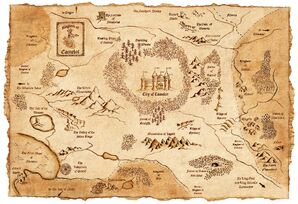 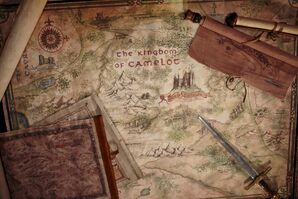 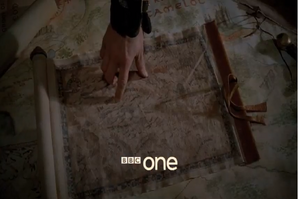 The Statued Creatures of Camelot 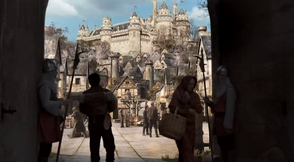 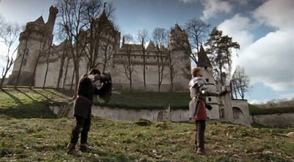 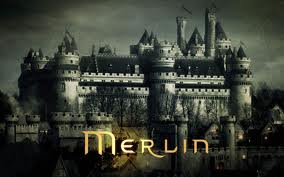 Outside of the great city and castle of Camelot 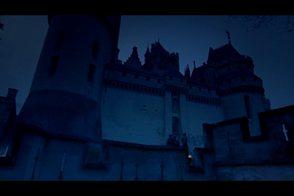 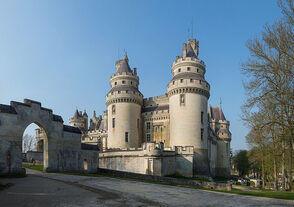 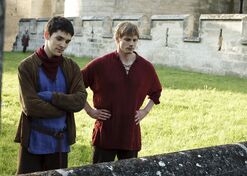 Camelot is the most famous castle and court in the Arthurian Legend. It was first mentioned in Chrétien de Troyes's The Knight of the Cart, and located at Caerleon, in Wales. It's Thomas Malory, in Le Morte d'Arthur, who, the first, identifies Camelot with Winchester, which is most familiar to English speakers today, as Thomas Malory compilation remains the main reference of Arthurian legend. The most notable people there are King Arthur, Merlin, Uther Pendragon, Ygraine, Guinevere and Morgana le Fay. Even though it is said that Caerleon is Arthur's castle, Camelot is the one castle that is mentioned the most.

Retrieved from "https://merlin.fandom.com/wiki/Camelot?oldid=177086"
Community content is available under CC-BY-SA unless otherwise noted.