Start a Wiki
watch 02:29
'Merlin' Lore: Balinor
Do you like this video?

Balinor was a warlock and a dragonlord, thought to be the last of his kind, until he discovered that nineteen years previously he had fathered a son, Merlin, who had inherited his gift of magic. Balinor was forced to go into hiding during Uther Pendragon's Great Purge, which saw the end of hundreds of creatures of magic. After Gaius helped him escape, Balinor stayed at the village of Ealdor where he met Hunith with whom he fell in love. When Uther discovered his whereabouts, Balinor was forced to flee again, leaving Hunith behind.

Balinor lived as a hermit for nineteen years, until he was visited by Arthur Pendragon and his long-lost son, Merlin, who informed him of their shared blood. Merlin and Arthur begged for help as the Great Dragon was destroying Camelot, and Balinor, being the last of his kind, was the only one who could help. Although hesitant at first, Balinor agreed, but was killed by a patrol of soldiers from a neighbouring country while defending his son, Merlin, who, at his father's deathbed, had inherited the ancient gift of Dragonlords and was now the only one who could tame the Great Dragon. With Balinor's advice ringing in his ears, Merlin successfully persuaded the dragon to leave Camelot.

Balinor was born into a family of Dragonlords and was once a renowned and celebrated Dragonlord and warlock who would use his powers to deter unwanted dragons. Near the end of the Great Purge, Uther Pendragon approached Balinor and asked him to bring the Great Dragon to him so he could make peace with it. However, Uther broke his promise and imprisoned the Dragon beneath Camelot and then had all Dragonlords rounded up and killed.

But Gaius, an ally of Uther, chose to hide Balinor with his friend Hunith. Gaius' actions would lead Balinor to consider him a great man. During his time with Hunith, Balinor fell in love with her and unbeknownst to him had fathered a child with her. But when Uther came after him again, he was forced to leave Hunith behind. Hunith later gave birth to their son, Merlin, who Balinor never knew about.

Life as a hermit

Balinor lived for the next twenty years in a cave as a hermit and grew to dislike human contact. Meanwhile his son, who had inherited Balinor's magical ability, had travelled to Camelot to live with Gaius and study magic. Merlin often visited the Great Dragon under the city for advice, and in return for this advice, Merlin was forced to free the dragon, who proceeded to devastate Camelot. During this time, Gaius mentioned that Balinor was Merlin's father and was still alive. He also said the only way Camelot would survive the dragon's wrath would be to go to him for help. Uther thought it was too dangerous to try and find him, but his son Arthur Pendragon and Merlin went regardless.

Discovery of Merlin and death

Merlin eventually found Balinor, who healed a wounded Arthur. At first, Balinor didn't want to help because he felt Uther and his kingdom were deserving of this fate due to the events of the Great Purge. However, after finding out that Gaius was in trouble, Balinor reconsidered and agreed to make the Great Dragon leave. Balinor also told Merlin the Dragon's true name, Kilgharrah. During their time together, Merlin revealed to Balinor that he was his son, a revelation that shocked him. Sadly, the party was ambushed by a group of knights on the journey back to Camelot, and Balinor was fatally wounded when he sacrificed himself for Merlin. With his dying breath, Balinor told his son that he knew he would make him proud (The Last Dragonlord).

Balinor's spirit continued to reside in the Crystal Cave.  He saw his son again when he was trapped in the cave and had his magic drained away by the Gean Canach. Balinor gave him hope and told him to rest. As Merlin rests his magic regenerates (Diamond of the Day).

Once a noble and just man, Balinor had become a shell of his former self by the time Arthur and Merlin discovered him. While he healed Arthur who had been raked by the claws of the dragon, he absolutely refused to help Uther, his persecutor. He angrily recounted how Uther destroyed his people and the dragons and then had the nerve to imprison the Great Dragon under the pretence of peace. As far as he was concerned, the dragon's anger and actions were justified and Uther and Camelot were getting what they deserved for what happened during the Great Purge.

However, Merlin was able to persuade Balinor to reconsider when he mentioned how Gaius told him of the Dragonlords' nobility, causing him to realise that he still had some friends left in Camelot to whom he owed a debt for saving his life all those years ago.

Balinor was shocked to learn that he had a son but was also happy and told Merlin that he was proud of him just before he died. He was also a man who considered his words before speaking.

Balinor, being a dragonlord, had great power and control over dragons. He had the ability to communicate with them, control them, and even kill them. He had inherited this ability from his father, who had in turn inherited the ability from his father. Balinor also had enough knowledge of magical healing to heal Arthur's wounds when he and Merlin visited him. He was also capable of telepathy because after his death, he telepathically spoke to Merlin, giving him advise on how to use his Dragonlord ability.

Balinor was also a skilled swordsman and was able to kill at least one knight when a group of them attacked. He then defended himself against another and probably killed him, before sacrificing himself for Merlin by taking a sword through the chest.

Balinor could also have Merlin's powers, as after he was mortally wounded, Merlin screamed at his attacker, and killed him, Balinor mumbled, "I see you have your father's talents", which implies Merlin inherited other powers from him.

Balinor was a skilled craftsman and in his spare time he often carved figurines out of wood, one of which was a dragon which appeared to be a miniature replica of Kilgharrah. When Balinor died, Merlin kept the small carving to remember him by.

Balinor Buckhannah is a character as the king of Callahorn in the Terry Brooks epic fantasy novel The Sword of Shannara who is compared to Boromir in the Lord of the Rings series. Balinor is also a magical land in the Mary Stanton young readers' novel Unicorns of Balinor.

After his father's death, Merlin inherited Balinor's gift and when he confronted Kilgharrah, he heard Balinor's voice in his head, whilst fighting him. Merlin managed to persuade the dragon to leave and saved Camelot from a devastating fate (The Last Dragonlord).

Merlin later mentioned Balinor to his friend Gwaine. He also kept the carving of a Dragon that Balinor had made as a memento of the short time they spent together (Gwaine).

When Merlin learned of another dragon egg, Kilgharrah referenced the sacrifices that Balinor had made to save him to encourage Merlin to try and recover this new dragon egg, the egg hatching a white dragon that Merlin named Aithusa (Aithusa). 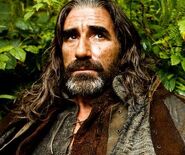 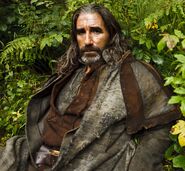 Retrieved from "https://merlin.fandom.com/wiki/Balinor?oldid=211505"
Community content is available under CC-BY-SA unless otherwise noted.