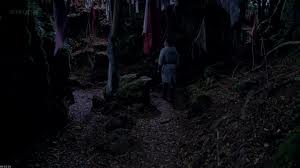 “I told the men to spare the women and children, but I know that some of them ignored the order. And there was so much happening. I wanted to stop it...”
— Arthur talking about the attack[src]

Arthur Pendragon led an attack on a Druid camp, which most likely occurred a few years before Merlin arrived in Camelot. After the attack, the site was turned into a shrine where Elyan was haunted by the spirit of a Druid child, killed during the attack. Against Arthur's orders, many women and children with the gift of magic were killed. He stated that he wanted to stop the attack, but he froze and didn't know what to do, because at the time he was very young, inexperienced and desperate to prove himself to his men and his father. He told the spirit of the Druid child that he can still hear the screams. It is something that Arthur will always regret (A Herald of the New Age).

Retrieved from "https://merlin.fandom.com/wiki/Attack_on_Druid_Camp?oldid=198373"
Community content is available under CC-BY-SA unless otherwise noted.