Parents killed during The Great Purge

“Alvarr has a fearsome reputation. He's a fanatic, and his supporters follow him unthinkingly, blinded by his charisma.”
— Gaius[src]

Alvarr is a sorcerer capable of both immense charm and shocking violence. He is a born leader and a dangerous enemy. Frustrated with Uther's tyranny against magic, Alvarr has gathered a loyal following of fellow renegades and will stop at nothing to fight for what he believes in.

According to Alvarr, both his parents were sorcerers, who loved him dearly and taught him everything he knows about magic. Unfortunately, the family was captured by Uther's forces during the Great Purge and his parents were burned at the stake (apparently Alvarr witnessed this happen). He was sentenced to death as well, but shortly before his execution, whether by magic or non-magical means, he escaped and fled from Camelot. Uther had the young boy pursued for quite some time, but Alvarr managed to escape. Heartbroken and alone, Alvarr vowed to avenge his parents and destroy Uther for his crimes against his kind. The years passed and Alvarr became a powerful sorcerer and skilled fighter.

During this time, many other sorcerers who had been wronged by Uther over the years joined Alvarr's cause, the most famous of them being the Druid boy Mordred.

Alvarr later became determined to obtain the Crystal of Neahtid, a magical item that can show the future to those who can use it. Knowing that Uther's ward Morgana had a connection to Mordred, Alvarr approached her and used both his charisma and Mordred to win her over.

Morgana stole the crystal and handed it over to him. Unfortunately for him, Merlin had followed Morgana and later led the Knights of Camelot to his settlement. Alvarr was captured and taken back to Camelot to be executed while Mordred managed to escape from the knights of Camelot.

Uther tried Alvarr for treason and sentenced him to death, but he would not get the chance to see this. Morgana, who had now officially turned against her guardian, drugged all the guards watching Alvarr, allowing him to escape. A furious Uther immediately suspected Morgana due to a previous argument with her, but was unable to prove anything (The Witch's Quickening).

Alvarr is charming, charismatic and a natural leader but he is also a dangerous enemy. Despite his charming demeanour, Alvarr is capable of considerable violence when necessary and was merciless towards his enemies. He even had the audacity to taunt a Knight of Camelot by demanding that he beg for his life and when the Knight refused, Alvarr killed him without hesitation or remorse. Alvarr was devoted to bringing an end to Uther Pendragon's reign and was unafraid to stand up against the King himself, calling him a criminal as he was dragged down to the dungeons.

Alvarr is very manipulative and used Morgana's attachment to Mordred, as well as his own charm and charisma, to manipulate her in order to achieve his own goals. Alvarr noted that Morgana was very beautiful and although he manipulated her, he seemed to be genuinely attracted to her and was grateful when she helped him escape from Camelot. Alvarr seemed to be a womanizer considering he already had a lover but was willing to charm Morgana. He actually told his lover that Morgana was beautiful and seemed completely shameless about the fact that his lover could interpret that as him telling her that he couldn't be loyal to a single woman.

Although Alvarr is violent, manipulative and a womanizer, he did have some sense of honour and did not tell Uther that Morgana was involved in the conspiracy, allowing himself to take all the blame. He also acted like a father figure to Mordred, telling him to run after their camp was attacked by Arthur and his knights. These traits indicate that Alvarr was not an evil man, merely one who was filled with hatred towards Uther.

A skilled swordsman, Alvarr is a very powerful warrior and was the last man standing when his camp was raided by Arthur and his Knights although Arthur easily subdued him when Alvarr attacked him. Alvarr is also a sorcerer and it is implied that he may use magic to help him pursuade people to join him since Gaius noted that his followers were unthinking and blinded by his charisma. Alvarr has never been shown to use magic aggressively however, even when he was surrounded by Knights of Camelot. 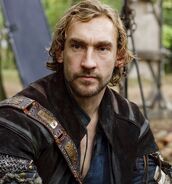