Merlin Wiki
Register
Don't have an account?
Sign In
Advertisement
in: Kings, Enemies and Villains, Male Characters,
and 14 more
English

“It's the sort of cowardly behaviour you would expect from him. Cowardly, but clever.”
— Gaius on Alined[src]

King Alined supposedly came to Camelot to sign a peace treaty. But what he really desired was war. War requires weapons and shuts down trade, and makes plenty of gold for this greedy, ruthless King.

Alined is the king of Deorham in the country of Albion and came to Camelot, seemingly wanting to create a peace treaty with King Uther and the "five kingdoms". However, what he really wants is war. He is noted for his cowardly behaviour and his greed for money. He believes that creating war will make him rich and uses his jester, Trickler in order to stir up hostilities in Camelot. After being thwarted by Merlin, he leaves Camelot, angry at his failure to stir up trouble (Sweet Dreams).

Gaius claimed that Alined was a cowardly, but clever man and he was willing to use magic in order to stir up hostilities in Camelot. He was cruel and unreasonable to Trickler, but also said that he would cast his fingers in gold if he succeeded in creating a war. Alined was furious when his plan failed and forced Trickler to run back to his kingdom tied to a horse, a feat that Trickler considered impossible. Alined also appeared to be a fairly skilled actor, since he was able to keep up the pretence of a peaceful king, though his act slipped when his plan to create a war failed. Arthur noticed this, but Alined quickly told him that he loved peace. 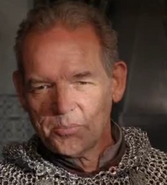