Alexandra Dowling is a British actress who portrays the character Kara, the love interest of Mordred in Series 5 of the BBC's Merlin. She graduated from Oxford School of Drama and has a number of theatre credits. She is set to play the female lead in the feature film Hammer of the Gods opposite James Cosmo.

In Game of Thrones, she portrays Roslin Frey. The news was announced on 11 November 2012. She joined the cast as a guest star in season 3 of Game of Thrones.

She has also recently joined the cast of BBC's The Musketeers in 2014 as Queen Anne, wife of King Louis. The show has been renewed for a second season. 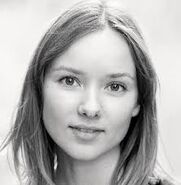 Add a photo to this gallery
Retrieved from "https://merlin.fandom.com/wiki/Alexandra_Dowling?oldid=213769"
Community content is available under CC-BY-SA unless otherwise noted.