“For I, and others like me, have dreamt of the world you seek to build. And we would gladly give our lives to help you do it.”
— Alator to Merlin[src]

Alator was both a magical warrior and a High Priest of the Old Religion. His formidable magical powers made him a powerful ally.

Alator said he had magic all his life, resulting in him being persecuted, chased, and hunted over all the five kingdoms. Eventually, he and his guard found their way to a city, where he was later found by Morgana. In exchange for her Healing Bracelet, Morgana asked him to kidnap and torture Gaius to find out who Emrys really was.

He and his companion then sneaked into Camelot and with the help of Agravaine, kidnapped Gaius. They took him to the old iron mines, where Alator tortured Gaius using a magical art (the mental torture) only known by the Catha.

Eventually he caused Gaius to snap, and the old physician revealed that Emrys was Merlin. He also mentioned Merlin's destiny, in which he would bring magic back to the realm and help to create Albion. Realising who he was facing, Alator switched sides. He saved Merlin from Morgana, and revealed how he and many others had dreamt of what Merlin and Arthur were trying to build. He said he was honoured to be in his presence, and attested to how he and many others would gladly die for him.

Afterwards, he departed and returned the healing bracelet to Morgana, which she found after she had regained consciousness (The Secret Sharer).

Three years later, Morgana began a manhunt for Alator in order to discover Emrys' location. She hunted him through the forest with dogs and then exploded the ground, knocking him unconscious. Alator was then tortured by Morgana using the Nathair but refused to talk. He claimed that if Morgana killed him, he'd go to paradise happy in the knowledge that Morgana would have failed.

Alator received a letter from Finna telling him that all was well and she had found Emrys; unfortunately, Morgana discovered this letter. After telling Alator she would 'find Finna and break her like a twig', she snapped his neck using magic. Both Finna and Merlin were sorrowful to learn of Alator's death (The Kindness of Strangers).

Although at first Alator appeared to be cruel and sadistic, he was actually a very honourable man, though he was willing to use torture to get information if he felt it was necessary. He showed no discomfort about torturing Gaius, but nevertheless protected Merlin from Morgana and told the young sorcerer that he was honoured to be in his presence and would gladly die for him if necessary. Because he chose to save Merlin, it is possible that Alator regretted torturing Gaius after learning that Merlin was in fact Emrys.

Apparently Alator did not know of Emrys before Morgana asked him to find out who he was because he switched sides after he learned who Emrys was. Presumably he originally thought that Emrys was not an important sorcerer, merely one who was an enemy of Morgana, and it was only after Gaius revealed his identity that he realised Emrys was actually destined to be the most powerful sorcerer who had ever lived. He had known about the destined Albion but didn't seem to have heard the name Emrys previously - it was after all the name used by the druids who are very secretive.

As a High Priest, Alator was shown to be an extremely knowledgeable and powerful sorcerer. He created a ring of fire and mentally tortured Gaius. He was also able to knock out Morgana with a single Stunning spell. It should be noted that even Merlin was unable to defeat Morgana so easily, although Alator gave Morgana little time to defend herself.

Just the fact that he was a High Priest of the Old Religion may indicate how much power he had. He could also apparently sense the power of Morgana's bracelet, much like Merlin could with The Cup of Life.

As a Catha, he was trained to resist all forms of pain, so much so that even Morgana couldn't break him, not even with a Nathair.

The place where Alator hides

Alator and Merlin in a deleted scene 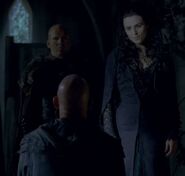 Alator captured by Morgana
Add a photo to this gallery

Retrieved from "https://merlin.fandom.com/wiki/Alator?oldid=212044"
Community content is available under CC-BY-SA unless otherwise noted.