Edit
watch 02:49
'Merlin' Lore: Aithusa
Do you like this video?
Play Sound

“A white dragon...is indeed a rare thing--and fitting. For in the dragon tongue, you named him after the light of the sun. No dragon birth is without meaning. Sometimes the meaning is hard to see, but this time, I believe, it is clear. The white dragon bodes well for Albion, for you and Arthur, and for the land you will build together.”
— Kilgharrah to Merlin[src]

Aithusa is a white dragon summoned from its egg by Merlin, who later saved Morgana's life by healing her wounds. The Dragon later participated alongside Morgana in scheming against Arthur, Merlin, and Camelot.

Aithusa was brought into existence after the Dragonlord, Merlin, rescued the egg from the Tomb of Ashkanar and Julius Borden. As Merlin learned from The Great Dragon, a dragon will only hatch when a Dragonlord gives it a name. Using his power as the last Dragonlord, Merlin names the hatchling Aithusa. Then, only moments later, Aithusa was born.

Kilgharrah, The Great Dragon, notes that the name Merlin chose is very fitting, for in the Dragon Tongue, the name means "Light of the Sun". It is fitting because Aithusa is a rare white dragon, and its birth symbolizes a good omen for Merlin's destiny, for Arthur, and the land that they will build together.

Aithusa presumably remains with Kilgharrah while maturing. When Morgana loses the throne of Camelot for the second time and is gravely injured fighting her way out, Aithusa flies to where she lies dying in the forest. Morgana, cured by the dragon's breath, appears both shocked and elated at the sight of the dragon, smiling in disbelief as Aithusa flies away, right after healing her (The Sword in the Stone).

Following the events of Aithusa saving Morgana, they were both captured and imprisoned by Sarrum of Amata, Aithusa grew too large for the pit in which the Dragon was locked away. With no room to grow, Aithusa became twisted and crippled, its cries of pain could be heard from outside the pit and were said to be more pitiful than that of Morgana's (Arthur's Bane, The Hollow Queen).

Aithusa bonds with Morgana within the next three years, since they spend two of those years imprisoned and tortured together by Sarrum. When Aithusa visits Morgana, just before Arthur and Merlin arrive to rescue the knights Morgana captured, the Dragon has grown quite a bit larger, although it is still small enough to fit in Morgana's bedroom and the caves in which Morgana is searching. Aithusa attacks Merlin, Arthur, and Gwaine, who are all shocked that Morgana has found a dragon. Merlin chases after Aithusa and when the White Dragon tries to attack him, he blocks the Dragon's fire with a magical shield and then uses his Dragonlord ability to command Aithusa to stop attacking. Merlin realises that something traumatic happened to Aithusa, and it is revealed that the dragon also cannot speak. Merlin commands Aithusa to go, allowing the Dragon to exercise its free will to choose its own loyalties. (Arthur's Bane:Part Two).

Later after these events, the Dochraid warns Morgana about Merlin's attempt to heal Morgana's puppet Guinevere, who was under her control, she turned to Aithusa for help. The white dragon attacks Merlin, Arthur, and Mordred with the knocked-out Guinevere in tow at a canyon. Just as before, Merlin uses his Dragonlord powers to send Aithusa away and end the Dragon's attack (With All My Heart).

Upon the Battle of Camlann. Aithusa uses its breath to forge a sword for Morgana's ally Mordred. Later on, during the battle, Aithusa fights alongside the Saxons and attacks the knights of Camelot by air, but flies away with a scream once Merlin uses his Dragonlord powers against the White Dragon. It is unknown what Aithusa's fate was after the battle, and unknown how the Dragon will fulfill its role as the "Light of the Sun" (The Diamond of the Day).

Aithusa is a dragon, with white scales, and wings with a white, almost transparent membrane. Aithusa has big, light blue eyes, four horns, short neck spikes, and tail spikes. As a newborn, Aithusa was about the size of a small bird. After three years, Aithusa appeared to be the same size as a Wyvern. How long it would take for the White Dragon to reach Kilgharrah's size is unknown.

Aithusa has a very mysterious personality. The Dragon saved Morgana's life, although it is unknown what motives led to this. Aithusa has been shown to have a genuine bond with Morgana, who treated the Dragon as a pet and developed affection towards Aithusa after the young Dragon saved her. Aithusa appears to be mute since it has never been seen speaking; whether this is the ramification of the trauma due to its imprisonment or to its youth is unknown. Aithusa is highly intelligent but a shy and reclusive dragon.

Merlin used his powers to summon Aithusa from its egg by giving the Dragon a name. However, Aithusa later saved and bonded with Merlin's arch-enemy, Morgana, for reasons unknown. Aithusa unwittingly attacked Merlin, Arthur, and Gwaine, leading Merlin to chase after the White Dragon and use his Dragonlord powers to stop Aithusa from striking again. He could tell that something terrible had happened to Aithusa and realised that the poor Dragon couldn't speak. When Merlin told Aithusa to go the first time, the Dragon refused; but then he commanded the Dragon to leave.

Kilgharrah was Aithusa's Dragon guardian. He indirectly indicated that Aithusa was male. Aithusa later saved Morgana's life and appears to have betrayed Kilgharrah.

For reasons that have not been revealed, Aithusa saved Morgana at the brink of death. Morgana was grateful and elated when Aithusa did this. The two were later imprisoned and tortured for two years by Sarrum of Amata, and after escaping, both of them were still haunted by their past experiences. Morgana was protective of Aithusa and reassured the Dragon that everything will be alright. Morgana treated Aithusa like a pet and the white Dragon seemed to be the only thing she genuinely cared about. Aithusa was shown to be loyal to Morgana and attacked Merlin, Arthur, and Gwaine, although the White Dragon couldn't resist Merlin's Dragonlord powers. Aithusa was later seen following Morgana through a freezing blizzard outside of Ismere, which shows Aithusa's bond with Morgana. It is also unknown how Morgana came to know the dragon by the name Merlin gave to it.

Aithusa is a dragon of the same type as Kilgharrah, so Aithusa has many or all of its abilities. The White Dragon has great magical power that is used through its breath, it can be used to heal, gift knowledge or power, and breathe fire. Although the dragon is only the size of a man, Aithusa can attack assembles of men and breathe fire. Aithusa was also able to create an enchanted sword; similar to Arthur's, by using its fire as Kilgarrah had done.

Series 4
Aithusa
The Sword in the Stone: Part Two 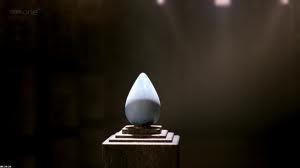 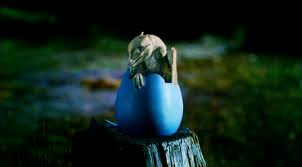 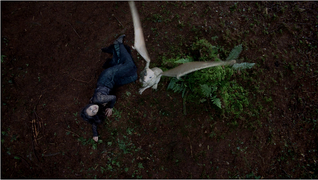 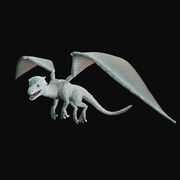 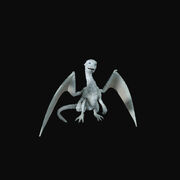 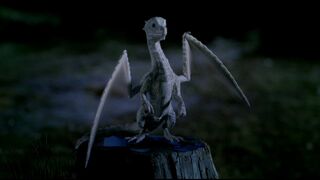 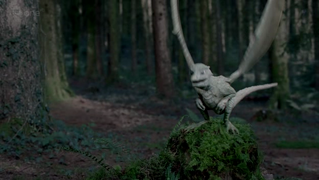 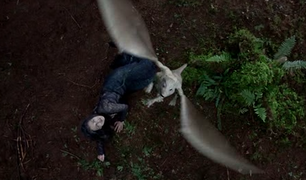 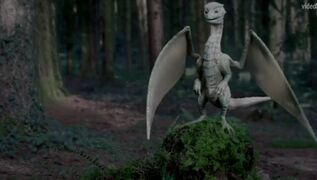 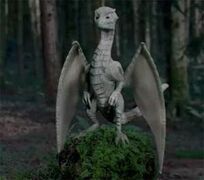 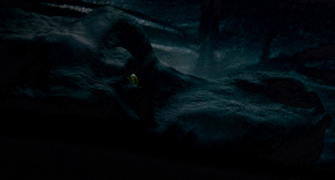 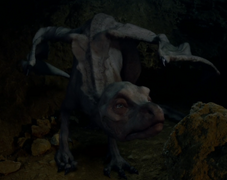 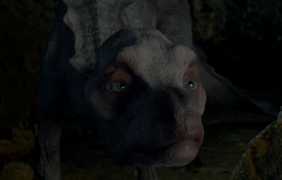 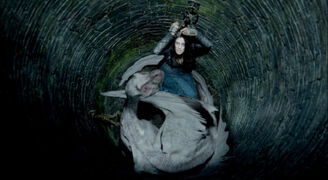 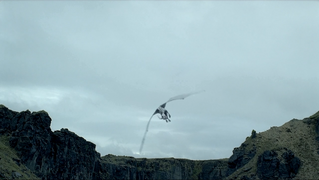 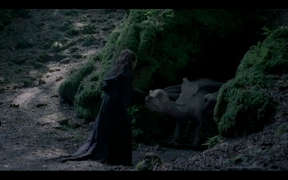 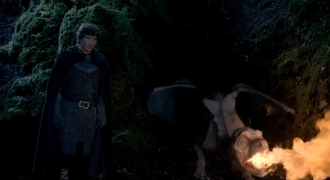