Not to be confused with the Nintendo DS video game of this episode, for the video game, see A Servant of Two Masters (Video Game)

“Arthur is strangely fond of the boy. He could prove useful. Very useful, indeed...”
— Morgana on Merlin

A Servant of Two Masters is the sixth episode of the fourth series of Merlin which was first broadcast on the 5th of November 2011.

When Merlin falls into Morgana's hands, he becomes a deadly weapon in her fight for supremacy. Using ancient magic, she puts friend against friend and creates the perfect assassin.

An oblivious Arthur is in great danger. Will anyone notice Merlin's unusual behaviour before he does the King some serious harm?

The episode opens with King Arthur, Merlin, and the Knights of the Round Table journeying secretly via the Valley of the Fallen Kings. Merlin is concerned and fears a possible attack on their group, but Arthur is confident their location remains secret. Suddenly, they are ambushed by mercenaries. A battle ensues and Merlin risks using his magic to save Arthur, but is wounded and struck unconscious in the process.

Later at night, Arthur and Merlin manage to escape the battle where they rest and assess Merlin's injuries. They joke and gyve about death and glory, and at the end of the conversation, Arthur somberly acknowledges Merlin's bravery and loyalty. Merlin thanks Arthur for saving his life.

The next morning, Arthur is awakened by movement in the forest. Merlin's condition has deteriorated further and he is now more pale and unable to move freely. As they continue their journey back to Camelot, they once again encounter the mercenaries, which Arthur engages in combat whilst Merlin looks on helplessly. As a fresh wave of mercenaries rush towards Arthur, Merlin uses the last of his strength and blocks their path by causing a rockfall using his magic, as Arthur shouts out his name. This results in Merlin's capture.

Agravaine is revealed to be behind the ambush, and rejoins Morgana with Merlin in tow. Morgana is unimpressed with Arthur's escape and angrily rebukes Agravaine, who draws his sword to kill Merlin to abate her displeasure. Morgana stops him, saying that she will use Arthur's fondness for Merlin against him, and Agravaine returns to Camelot.

Back at Morgana's hovel, Merlin, who has been bound by Morgana, is woken up when Morgana douses him with water. Merlin is prepared to die before betraying Arthur or Camelot, to which Morgana replies that she does not plan to kill him. She heals Merlin with her magic and later, with her dark magic, she summons a Fomorroh, a multiple headed snake, similar to the Hydra, revered by the High Priestesses of the Old Religion.

Morgana explains it is capable of enslaving the mind of the host it possesses, forcing them to obey the summoner's will until it is the only thing they seek, consuming their personality in the process. As Morgana implants the Fomorroh into Merlin's neck, she says "You must kill Arthur Pendragon." Meanwhile, Arthur and his Knights return to Camelot, where a search party is commissioned to rescue Merlin. Agravaine reports that Merlin is lost forever, but Arthur is unwilling to accept it. He is still troubled over the ambush, to which Sir Leon replies that they must have a traitor in their midst who revealed their location. The next morning, Arthur wakes up in his room and vaguely sees a stranger wearing similar clothes to Merlin. The stranger turns out to be Arthur's new manservant, George, who is highly efficient albeit dull and obsequious. Arthur asserts that he does not need a new manservant, and that he prefers things the old way.

Arthur sets out with Gwaine to search again for Merlin, whilst Gwen expresses her concern. They later stumble across Merlin emerging from a bog, seemingly unharmed. Arthur is relieved and overjoyed, hugging Merlin even though he is filthy, and the three return to Camelot.

Back in Camelot, Gaius and Merlin have lunch; however, Gaius is unsettled by Merlin's change in personality, which is much more hasty and offensive. Merlin takes a bottle of aconite, a potent poison, and plans to lace Arthur's lunch with it. His attempt is foiled by Gwen who has already prepared Arthur's lunch. Merlin is angered and strides out of the room, tossing the poisoned food into a pig pen. Later, he sets up a crossbow in Arthur's wardrobe which is triggered by opening the wardrobe door. This attempt fails when Arthur does not open the door wide enough to trigger the crossbow, but Arthur is too distracted by the traitor problem that he does not notice the attempt on his life. By now Gaius and Gwen confirm their suspicions and rush to save Arthur, only to witness Merlin rushing at Arthur with his ceremonial sword. However, Merlin knocks himself out by colliding into a stone pillar Arthur was standing near. When Arthur leaves, Gwen clobbers Merlin with a pitcher for good measure.

In Gaius' chambers, they discover the Fomorroh in Merlin's neck, paralyse it and extract it, leaving him to recover and assuming that all is well. Hours later, when Merlin wakes up, Gaius notices that the Fomorroh has returned and is very puzzled. In Arthur's room, Merlin prepares the bath and pours in a jar of corrosive salts, which turns the bath into acid strong enough to corrode steel. Gaius and Gwen rush into the room, the latter again clobbering Merlin unconscious with a pitcher. Arthur is naked when Gwen and Gaius come into his chamber. They then inform a confused Arthur he cannot have his bath today.

Gaius discovers that the Fomorroh is able to regenerate even if it is killed. He sedates the Fomorroh with a poultice, and revives Merlin. They devise a plan to save Merlin by destroying the mother beast and Merlin disguises himself as Dragoon the Great while the Fomorroh remains dormant. Merlin journeys out to Morgana's hovel and transforms along the way, but is happened upon by the Knights of the Round Table while having difficulty re-mounting his horse (due to his old age). The Knights plan to arrest him and take him to Camelot. Merlin, as Dragoon the Great, attempts to talk his way out but is forced to immobilise them with magic when Gwaine moves to strike him. Using his fallen friends as steps, he mounts his horse and rides away.

Agravaine goes to Morgana to deliver news that he has turned Arthur's suspicions from himself to Gaius. Morgana is still unimpressed and warns him to do better, before going out herself to collect firewood.

Merlin returns to Morgana's hideout and begins his search for the mother beast. As he is looking, Morgana returns and is startled, fleeing the room, having been warned that he (Emrys) would be her doom, and recognizing him from one of her prophetic dreams. When she returns, she is evidently shaken and scared even claiming that he is not real. Merlin plays along with it, until Morgana moves forward to stab him and he blasts her back with unspoken magic.

Outside, a magic battle ensues with both of them taking damage. Merlin has the opportunity to kill Morgana, but hesitates allowing Morgana to hit him directly with her telekinesis. Merlin, recovering and angered, summons a great whirlwind to attack Morgana, knocking her unconscious and magically destroys the Fomorroh in a small campfire.

Back in Camelot, Gaius again extracts the snake as Gwen enters the room, saying that Arthur is looking for him. He rebukes Merlin for his two-day absence and sentences him to learn how to be a proper manservant from George. In the woods, Agravaine is seen looking for Morgana, and discovering her lying unconscious, though still alive, he carries her back into her hovel.

Merlin tells him to leave him behind. He passes out

"If your true nature is revealed, I don't know what use I'll have for you"

Gwen tells Arthur to be safe when searching for Merlin

Merlin is back. And a pig is found dead by poison used on Arthur's meal?

The Fomorroh in Merlin's neck

Gaius and Guinevere agree, too

Gwen puts an end to this foolishness.. for the first time

Merlin later disguises himself as Dragoon, and uses the knights to get on his horse

Dragoon throws Morgana away with his magic 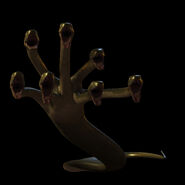 Retrieved from "https://merlin.fandom.com/wiki/A_Servant_of_Two_Masters?oldid=213352"
Community content is available under CC-BY-SA unless otherwise noted.