“She's not the problem, you are!”
— Guinevere Pendragon to Tyr Seward[src]

A Lesson in Vengeance is the seventh episode of the fifth series of Merlin. This episode also marks Queen Guinevere's first attempt on King Arthur Pendragon's life.

Darkness steals into the very heart of Camelot, as Morgana and her puppet Queen hatch a sinister plan to murder the King, but when stable hand Tyr Seward becomes caught in the crossfire, he threatens to ruin everything… As the plot thickens and reaches its deadly climax, can a suspicious Merlin unravel the truth before it’s too late?[1]

Arthur and Guinevere are on a ride with Merlin. It is their anniversary, and they speak of how Arthur forgot about it and both Merlin and Guinevere had to remind him that it was that day. On the ground nearby there is a small bag which explodes and causes Arthur to fall down from his horse. A moment after he hits the ground, he is attacked by two bandits. He fights them off, with a little help from Merlin, and finally defeats them. Arthur is clearly shocked by what happened, as is Merlin.

In his chambers Gaius treats Arthur's wound and tells him that he is fortunate not to have broken his neck. Arthur wonders if the men who attacked him were questioned, but Gaius replies that their wounds were so fatal that it was impossible to learn anything from them. Sir Leon then arrives with a guard, and shows Arthur his saddle that had an unpicked and re-stitched girth which was designed to make the saddle break. After hearing this, Arthur says that Merlin may be right this time about this not being a coincidence.

Gwaine then goes with two knights to Tyr Seward, the stablehand to the King and arrests him. The confused Tyr is taken away by the knights. Leon then goes to Tyr's mother Gelda Seward and informs her that her son has been arrested in suspicion of treason, whilst the other knights look around in the house. Gelda does not believe her son has done anything wrong, but Percival finds the thread that was used to re-stitch the girth of the saddle. Tyr is brought before Arthur who questions him. Tyr denies all the things he is accused of, but Arthur does not believe him and asks him to reveal the names of his accomplice. Tyr tells him he has no name to give him, which causes Arthur to sentence him to death.

As they leave the meeting, Merlin tries to persuade Arthur to reconsider his decision, but he refuses. He then discusses with Gaius that he does not understand Arthur's decision and that he thinks someone else was involved. In his chambers, Arthur is thinking about the same as he looks at the thread used to stitch the saddle. Guinevere tells him that even a great king has enemies in his court who can often be the people he would least suspect. According to her, Tyr is such a person.

Merlin then visits Tyr in prison, and brings him some food to eat. Merlin asks Tyr how he could have done this. Tyr explains that it was not him that caused the King to fall from his horse but someone else. Tyr is hesitant in naming the person who was messing with the saddle, as they promised harm to his mother. Merlin explains that everything will be fine and for him to say who he saw.

Tyr says that he was held up in the stables for the night as a horse was suffering from colic. He says that he saw someone messing with the King's horse. When confronted, the person threatened to kill his mother if Tyr opened his mouth. Merlin persuades him to tell the name but Tyr refuses saying that they were dangerous. Merlin immediately goes to Arthur and tells him that Tyr has something important to say. As Arthur gets ready to leave, Guinevere persuades him to visit Tyr in the morning as he would be mentally more stable by that time. Arthur agrees and decides against going. Merlin finds this behaviour very strange and talks to Gaius about it, but Gaius puts it down saying that Gwen has been through a lot lately, with Elyan dead.

Later that night Gwen visits Tyr in the prison and kills him. Arthur is shocked to find Tyr's body and repents on not having talked to him when he had the chance. Guinevere then goes to visit Morgana in the woods. She apologises for not being successful. But Morgana is happy that Guinevere managed to silence Tyr forever. They are interrupted by a Camelot patrol led by Gwaine. However, Morgana uses her magic to stop them from discovering Gwen.Meanwhile back at Camelot, Gwaine said that sorcery was at work. Merlin suspects that Morgana is meeting with somebody who knew the Citadel in and out. Morgana then goes to Sindri, an apothecary who lives just outside Camelot, and gets two fatal poisons from him. Both would help Guinevere to kill Arthur. Morgana pays Sindri some coins, and goes on her way.

Arthur suspects that there is a traitor in Camelot who is trying to kill him. Gwen encourages Arthur that they will find the traitor, but little does Arthur know that Gwen is the traitor. Merlin and Gaius are walking around in the forest, trying to find some clues to who is the traitor. Gaius finds a piece of cloth on a tree, and states that whoever owns it is rich and wealthy. Guinevere then goes in to the Market and is met by Morgana, who uses magic to disguise herself as Hilda and gives her the poison, then leaves.

Guinevere then sneaks the unconscious poison into Arthur's drink. Arthur, after drinking the potion falls unconscious, and Gwen manages to poison him. When Gaius and a few of the knights come into Arthur's room, Gaius declares that the king was poisoned. Gwen says that there is only one person she knows who has access to his food: Merlin.

Meanwhile in the cells, Gaius says that Merlin was right, and that Morgana did something to Gwen in the Dark Tower, and that Merlin's magic is Arthur's only hope. Later, Gaius sneaks an aging potion into Merlin's cell. Merlin, now as Dragoon the Great, walks out of the cell, and is able to lie to the guards and pass through the dungeons. Merlin encounters Audrey, and teases her about cooking horrible food. When Audrey questions him further, Merlin knocks her out with a pan. When Merlin (now his normal form) is trying to sneak into Arthur's chambers, Gwaine sees his shadow, and calls other knights to come with him. Merlin manages to outwit the knights by putting out their torches, and is able to get into Arthur's palace. Gwaine informs Gwen that there is an intruder in Camelot, and Gaius gets Gwen away from the chambers, so that Merlin can heal Arthur. Merlin manages to heal Arthur without Arthur knowing, and goes back to the dungeons.

Arthur calls Merlin back in the morning, saying that Merlin was wrongly accused of poisoning him. Merlin starts to tell Arthur that Gwen is the traitor, but Arthur says that they need to go for a meeting. Arthur says to the captured Sindri that Gwen found some marks on the poisons and that she traced them to him. Sindri says that he didn't know that it was intended for Arthur, and says that Morgana had brought it from him. Arthur says that thanks to Gwen he was able to trace the poisons and uncover a new evil. The knights chant "Long live the queen!" while Merlin looks at Gwen with a suspicious gaze. 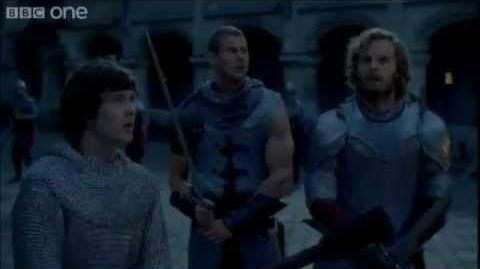 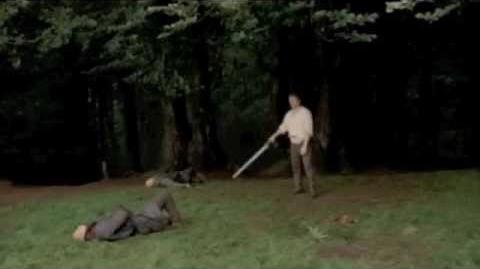 Merlin S5 Episode 05.07 'A Lesson in Vengeance' 2nd preview
Add a photo to this gallery 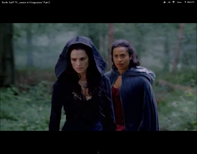 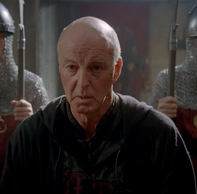 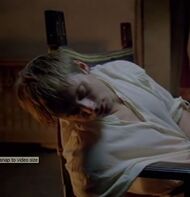 Rate this episode!
Retrieved from "https://merlin.fandom.com/wiki/A_Lesson_in_Vengeance?oldid=214115"
Community content is available under CC-BY-SA unless otherwise noted.