She is best known for her portrayal of Dayna Mellanby in the third and fourth seasons of the television sci-fi series Blake's 7. Her recent television work includes roles in Lewis, Casualty, Skins, Midsomer Murders, The Last Detective and the Poirot episode "The Mystery of the Blue Train".

Simon's film appearances include Cry Freedom and Milk and Honey, for which she was nominated for a Best Actress award.

In 1992 she starred alongside Brenda Fricker in the TV film Seekers, produced by Sarah Lawson.

Simon is also a notable stage actress who has performed frequently with the Royal National Theatre and Royal Shakespeare Company, being cast as one of the three 'weird sisters' in Macbeth alongside Kathy Behean, Lesley Sharp and Bob Peck who played the lead.

As a black actress, she has been at the forefront of 'colour-blind casting', frequently taking roles traditionally considered white. One example is Maggie in Arthur Miller's After the Fall, which has been said to have been based on Marilyn Monroe, former wife of Miller, a performance which won Simon the Evening Standard's Best Actress award in 1990, as well as several Best Actress nominations.

She was also nominated for a Best Actress award for her performance in Golden Girls at the RSC.

In 2009 she appeared in the inaugural episode of the resurrected TV series Minder.

Simon was awarded the OBE for services to drama in 2000, and also received an honorary Master of Arts degree from the University of Leicester in 1995.

Josette married Mark Padmore in 1996, but the couple divorced in 2004. They had one child. 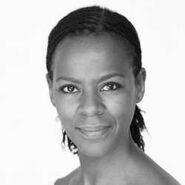 Add a photo to this gallery
Retrieved from "https://merlin.fandom.com/wiki/Josette_Simon?oldid=197834"
Community content is available under CC-BY-SA unless otherwise noted.